Does Trump’s trip to Saudi Arabia and Israel signal that he’s gone all in on neoconservatism? From Daniel Lazare at consortiumnews.com:

Exclusive: In his Mideast trip to Saudi Arabia and Israel, President Trump sought some political safe harbor by tacking toward neocon orthodoxy and jettisoning his campaign promises of a more rational strategy, writes Daniel Lazare.

With astounding precision, Donald Trump zeroed in on the worst possible Middle East policy option in his recent trip to Saudi Arabia and made it his own. He rebuffed the efforts of Iran’s newly elected moderate government to open up communications with the West and instead deepened America’s alliances with decrepit autocratic regimes across the Persian Gulf. 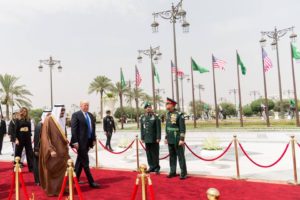 Turning up his nose at Iran — a rising young power — he embraced Saudi Arabia, which is plainly on its last legs. It was a remarkable display —  rather like visiting a butcher shop and passing up a fresh steak for one that’s rancid and smelly and buzzing with flies.

Saudi Arabia is not just any tired dictatorship with an abysmal human-rights record but one of the most spectacularly dysfunctional societies in history. It takes in half a billion dollars a day in oil revenue, yet is so profligate that it could run out of money in half a decade. It sits atop 18 percent of the world’s proven oil reserves, yet is so wasteful that, at current rates, it will become a net importer by the year 2030.

Its king travels with a thousand-person retinue wherever he goes while his son, Deputy Crown Prince Muhammad bin Salman, plunked down $550 million not long ago when a 440-foot yacht caught his eye in the south of France. Yet this pair of royal kleptocrats dares preach austerity at a time when as much as 25 percent of the population lives on less than $17 a day in trash-strewn Third World slums.

Similarly, Saudi Arabia’s appetite for high-tech weaponry is such that in 2015 it became the largest arms importer in the world. Yet its military is so inept that it is unable to subdue ragtag Houthi rebels in neighboring Yemen or even stop them from raiding deep inside Saudi territory and launching regular missile attacks.

One response to “Trump Submits to Neocon Orthodoxy, by Daniel Lazare”