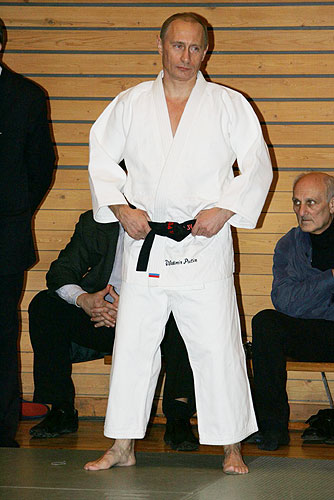 Putin has made many of his critics look like fools, thus the rage and hysteria.

Vladimir Putin is a black belt in judo, the only Russian and one of the few people in the world to be awarded the rank of eighth dan. He also practices karate.

A fundamental principle of martial arts is using an opponent’s size and momentum against him. This is Putin’s strategic approach. Westerners demonize Putin, but few try to understand him. Trying to understand someone else is regarded as a pointless in narcissistic America, selfie-land. Perhaps 90 percent of the populace is incapable of grasping anything more subtle than a political cartoon.

That’s a pity, because Putin has accomplished a geopolitical triumph worthy of study. He’s catalyzing the downfall of the American empire, and it has nothing to do with subverting elections or suborning Trump.

Putin coopted the most important oligarchs, letting them hold on to their loot and power in exchange for their allegiance. This bargain has been a bulwark of both his continuing political support and his reportedly immense personal fortune. He quelled a long-running insurrection in Chechnya and stabilized the situation there, exchanging a measure of autonomy for a declaration in the Chechen constitution that it was part of Russia. During his first two terms, from 2000-2008, the economy began recovering from the 1990s. Projecting a law and order image while stifling critics, he solidified what has become his unwavering support, winning 72 percent of the vote in the 2004 presidential election.

A coterie of highly placed idiots in the US and Europe insist that Putin’s ultimate goal is to reconstitute the former Soviet Union on his way to global domination. Russia’s GDP, after 18 years of recovery, is $1.4 trillion, compared to almost $20 trillion for the US and over $17 trillion for the European Union. Russia’s military budget is $61 billion, versus $250 billion for NATO nations (excluding the US) and over $700 billion for the US. The scaremongering screeds never say where Russia will get the money to invade and conquer former Soviet provinces, much less conquer the world. Putin, unlike America’s high and mighty, realizes from Soviet experience that empires drain rather than augment an empire’s resources.

Conquering the world is one thing, throwing the American empire to the mat another. Putin must have smiled when George W. Bush invaded Afghanistan in pursuit of Osama bin Laden, purported mastermind of the 9/11 attacks. The US’s hubristic rage led it into what has been a quagmire at best, a graveyard at worst, for a string of invaders, including the Soviet Union.

Defenders fighting on their own turf have huge advantages over occupying forces, rendering conventional invasions virtually obsolete. Relatively inexpensive grenades, mines, IEDs, and shoulder-launched missiles, often supplied from outside the country, take out expensive tanks, artillery, aircraft, and military personnel. The insurgents know the language and territory, they’re supported by the local populace, they can set off remote bombs and blend in with the civilians. They aren’t going anywhere and can wait out the invaders, sapping their morale and political support back home.

Eighteen years after the Afghanistan invasion, Putin is still smiling. With each military failure since, the US became more stupidly belligerent, bearing massive costs in blood and treasure. Iraq, Libya, Syria, Yemen, Somalia: talk about letting the enemy defeat itself! And as the US plunged into one inextricable morass after another, it plunged ever deeper into debt.

Russia, meanwhile, has one of the developed world’s lowest debt ratios, stockpiles gold, and is divesting its US debt. It has teamed up with China on the Belt and Road Initiative. That series of projects, financed primarily by the Chinese, advances Russia’s and China’s interests and influence across Asia, the Middle East, and Europe. This approach seems to garner more support than US bullets and bombs.

Russia’s one military foray in the Middle East has been Syria. Obama’s hapless strategy (regime change? terrorist eradication?) left the US at cross-purposes with itself. Putin suffered no such confusion, helping Bashar al-Assad turn the tide against the insurgents. The US pretends to have done the same. Putin strengthened the Shiite axis—Iran, Iraq, Alawite Syria, and Hezbollah—about which Israel, Saudi Arabia, and US neoconservatives have fretted for years. The insurgents are on the run and all the US can do is shout: “And we helped!”

Putin scored a geopolitical coup. He effectively stood by his allies, in contrast to America’s ineptitude and ever-shifting alliances and objectives. The conflict sent hundreds of thousands of refugees to Europe. Russian intervention reversed the flow. Saner souls in Europe have to be questioning European subservience to the US and NATO.

Putin has expressed his consternation at NATO’s expansion to Russia’s borders, especially the prospect that NATO could incorporate Ukraine. While that’s an understandable concern, the expansion hurts the US more than Russia. The US didn’t intervene when Russia got involved with Georgia, the Crimea, or Ukraine. Why? Somebody in Washington looked at a map and determined that with Russia’s decided geographical advantage, the game wasn’t worth the candle.

NATO leaves its members hostage to the likes of Lithuania, Montenegro, and Croatia. It’s always at the borders that empires first falter. The US is treaty-bound to go to war to defend tiny, far-flung states that are a stone’s throw from Russia. The US lays out the lion’s share of the money, stations soldiers, and maintains bases pretending that it would actually defend these geopolitical midgets. Putin must smile at the effort wasted on the nonexistent possibility that he’ll invade.

Often, he doesn’t even need to lift a finger to body slam the US. The Democratic party and neoconservatives, and their toadies in the media and intelligence community have rabidly peddled an evidence-free concoction that he and Trump colluded to deny Hillary Clinton her ordained presidency. It’s emblematic of America’s deranged politics.

“Masculine” is now a pejorative. Identity is everything, merit nothing. A military that hasn’t won anything in 73 years is widely honored. Men in dresses enter women’s restrooms. Confronted by intellectual challenge, college students retreat to safe spaces. People who illegally enter the country are given most of the privileges of citizenship, including state-provided benefits. Americans watch an average of five hours of TV a day. Over 60 percent are obese and an opioid epidemic kills tens of thousands. Even mainstream media pundits fret about an impending “civil war,” and for once they might be right. None of this is Putin’s doing, but he’s undoubtedly amused at all this decadence and division.

Trump is determined to pick America up off the mat. SLL has said repeatedly that his foes are most worried about their own criminality being exposed and prosecuted. That’s essential if the country is ever to regroup and recover. Trump’s summit with Putin and subsequent press conference performance left his foes foaming at the mouth, bandying terms like “disgraceful” and “treason.” That he braved the idiotic torrent before and after the summit, seemingly unperturbed except for a few acerbic tweets, suggests that he’s got something up his sleeve. Judging by their insane hysterics, the opposition knows it. As always, their tactics betray desperation and weakness, not strength.

That something up Trump’s sleeve may well be the initiation of criminal proceedings against a long list of suspects for everything from obstruction of justice to conspiracy and treason, just in time for the midterm elections. That’s more a hunch than a hypothesis. However, it won’t be a bolt out of the blue if it happens. If it doesn’t happen by the midterms, it most likely never will.

50 responses to “The Black Belt Strategist, by Robert Gore”