The slow return of Eurosclerosis, by Thomas Kirchner and Paul Hoffmeister

Eurosclerosis, the slow or no growth disease caused by overtaxation, overregulation, too much government, and rigid labor markets, is creeping up on Europe once again. From Thomas Kirchner and Paul Hoffmeister at camelotportfolios.com:

With protests by yellow vests in France approaching their six month anniversary and the European economy showing signs of not a temporary dip, but prolonged weakening, it is a good moment to take a step back and analyze the current situation as well as its implications for the medium to long-term outlook for Europe.As we see it, European economies have been weakening significantly, and even worse, Germany, the European Union’s largest economy comprising almost 21% of the area’s GDP in 2018[i], is on the verge of recession. With Germany the economic locomotive of the euro area, there may not be much reason to be optimistic. The country’s economic problems appear to be structural, due to high taxes, excessive government spending, failed energy policies and other regulatory constraints. Thinking about the years ahead, we aren’t optimistic that the policy response from the German government — as well as other European governments such as in France, Italy and Greece — will be strong enough to avoid a prolonged economic malaise for the continent. As a result, we believe that the global economy will suffer from Eurosclerosis in the coming years. 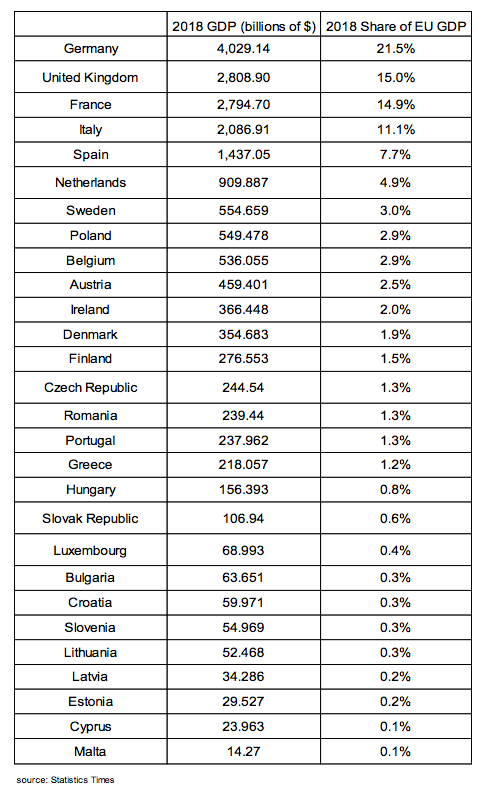