Localism in the 2020s (Part 1) – The 2nd Amendment Sanctuary Movement, by Michael Krieger

Many of you probably have heard of the second amendment sanctuary movement, which consists of municipalities and counties across the U.S. passing resolutions pledging not to enforce additional gun control measures infringing upon the right to bear arms. The current movement traces its origins back to Effingham County in southern Illinois, which passed a resolution in April 2018 calling the county a second amendment “sanctuary”, essentially a vow to ignore gun control legislation proposed by Illinois state lawmakers. This particular tactic gained traction not just within Illinois, where 67 of 102 counties have now passed similar resolutions, but throughout the country. 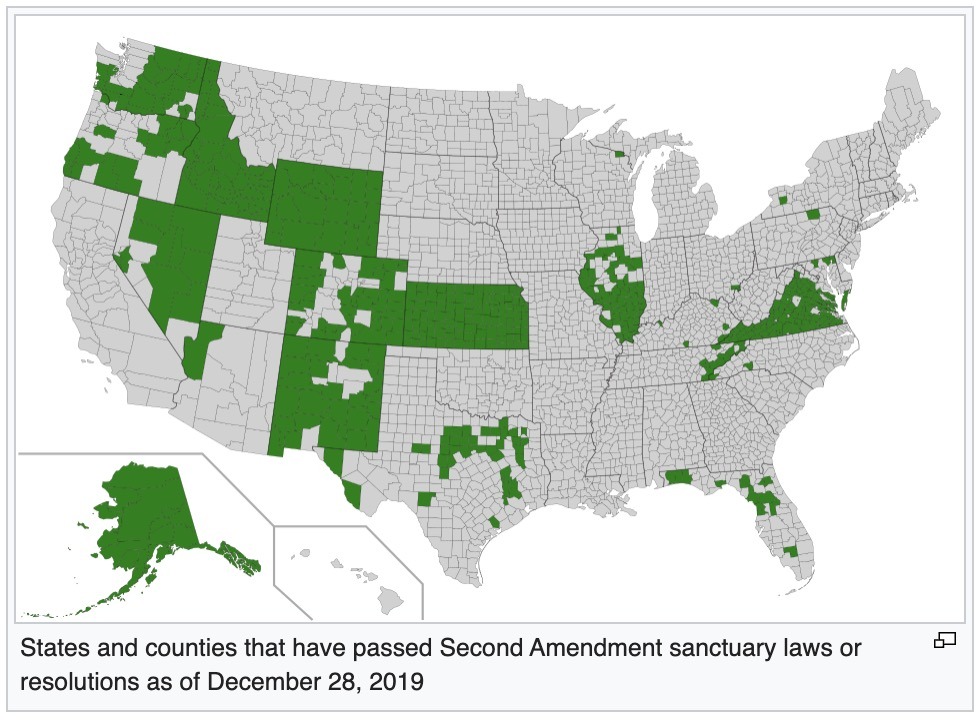 The movement started gaining more attention over the past couple of months following the blistering momentum it found in Virginia after Democrats won the state legislature in November. As of this writing, 87 out of Virginia’s 95 counties have passed such resolutions and it’s important to note that virtually all of them were passed in the two months since the election. In other words, this is happening at a very rapid pace.

Before discussing the significance of all this, let’s address some thoughtful criticism of the movement from Michael Boldin of the Tenth Amendment Center. His primary point of contention is that the resolutions these municipalities and counties are passing — unlike immigration sanctuary ordinances passed in places such as San Francisco — carry no weight of the law.

Specifically, they’re not passing ordinances, but rather resolutions, which Michael describes as “non-binding political statements.” In other words, it’s all just talk at this stage and he’s frustrated that much of the media coverage makes it seem what’s being passed is more concrete than it actually is. Although I disagree with his overall assessment of the importance of what’s happening, he makes many good points and puts some much needed meat on the bone of this issue for those getting up to speed. He published an instructive video on the topic, which I recommend checking out.

Despite his legitimate criticisms, I believe the second amendment sanctuary movement is meaningful in the bigger picture of the nation’s emergent social and political evolution. Although it is indeed mostly just talk at this point, there’s nothing wrong with that. If you’re going to build a movement you need to start by talking and establishing some sort of consensus amongst your peers. More concrete steps can follow in the future. Don’t forget this is a learning process for many of the people involved, and many of those coming out to these city and county meetings likely never engaged politically in such a manner before in their lives.

Moreover, if the goal from the start had been to pass ordinances that carry the weight of the law, the movement wouldn’t have spread nearly as fast. It wouldn’t have catapulted into the consciousness of so many across the country and I probably wouldn’t be writing about it right now. The fact that it’s largely just talk via county and city resolutions allowed the movement go viral in a short period of time, which is a fine strategy when it comes to something like this.

That said, it’s important to note when it comes to something as serious as this — municipalities and counties vowing to refuse to enforce state and federal laws — the only thing that really matters in the end is how the public actually responds when and if the rubber meets the road. Are people willing to make major sacrifices like go to jail? That’s ultimately the most important variable in the end. What sort of fortitude do these local communities really posses on this issue, and how many are willing to engage in genuine acts of civil disobedience and sacrifice if push comes to shove. We simply don’t know.

Even bigger picture, the second amendment sanctuary movement should be seen as a manifestation of a core trend I except to grow considerably in the decade to come: localism. The people driving this movement aren’t petitioning Washington D.C. or even their state house, instead they’re looking to their friends and neighbors and taking a unified stand at the local level. Simply put, they’re attempting to take matters into their own hands as opposed to begging distant authority figures. This is in large part why their actions seem disorganized and unsophisticated; these are just regular people saying enough is enough, and in this case the line in the sand happens to be firearms.

This goes against everything we’re taught. We’re led to believe we have representatives in D.C. that actually represent us and we just need to elect the right people to have our voices heard. This sounds good, but we all know by now it’s a lie. These largely rural Americans are finally starting to give up on this lie and are looking to local solutions because they have no other choice. It’s hard overstate how important this is. It demonstrates a new degree of political realism in the face of disconnected and unresponsive governments far removed from where they live. It’s people finally realizing they’re much better off connecting and working within their own communities to change things rather than groveling to self-interested, professional political crooks.

Importantly, this is how it should be. If we’re going to crawl out of the mess we’re in it seems clear we need a different approach. Pretending all we need to do is “elect good people” to Congress or the Presidency is a slave mentality. The system itself is so completely corrupt and so explicitly rewards criminal and evil behavior, we need to start thinking and acting differently, which means focusing on what’s closest to home. Get your own house in order before trying to save the world.

As stated earlier, the fact the second amendment sanctuary movement is grounded at the local governmental level (municipalities and counties), as opposed to the state or federal level, is extremely significant.

This sort of thing will be a major trend in the 2020-2025 period.
Localism rises, seemingly in spontaneous fashion across the country in response to the failures and authoritarianism of centralization. https://twitter.com/LibertyBlitz/status/1207392413846659072 …

Whoa. This is what the early stages of localism look like. In this case the issue is guns, but it can apply to all sorts of issues.
This is fascinating.https://www.theorganicprepper.com/virginia-activates-militia-felony/ … 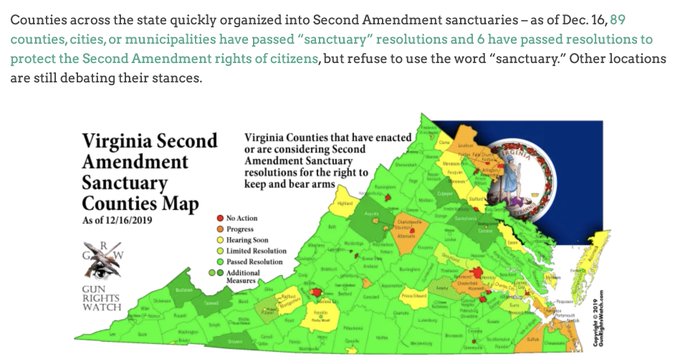 I wrote on this topic earlier this year. While I disagree with Bookchin on all sorts of issues, I completely agree with his conclusion that politics should be centered around the municipality. Localism is the only way you can truly have self-government.https://libertyblitzkrieg.com/2019/06/26/the-next-revolution-by-murray-bookchin/ …

The Next Revolution by Murray Bookchin

We cannot content ourselves with simplistically dividing civilization into a workday world of everyday life that is properly social, as I call it, in which we reproduce the conditions of our indivi…

See Michael Krieger’s other Tweets
It’s also crucial to see this in a much larger context. As the populace (across ideological lines), grows increasingly disillusioned with their complete lack of agency within our imperial oligarchy, engaged citizens will naturally shift focus toward the local level in pursuit of alternative avenues for change. Firearms is just one issue, but there are many more and the list is seemingly endless.

In general, we need to stop believing in the fantasy that topdown change from Washington D.C. will magically fix the problems of such a geographically and politically diverse nation. It’s lazy, unrealistic, and more often than not dangerous. Change needs to start at home, and people will turn to localism out of necessity. More in Part 2.

2 responses to “Localism in the 2020s (Part 1) – The 2nd Amendment Sanctuary Movement, by Michael Krieger”