Jobless Thursday – How the Donald Is Making America Poor Again, by David Stockman

Make no mistake, America is getting massively poorer by the day. From David Stockman at lewrockwell.com:

Maybe it is time to don our tinfoil hat. Here’s the flat-out lie the WSJ reported this morning in response to the weekly unemployment claims release. It sure did make you think that the jobs picture is improving by the week:

Just to make sure you grasped the good news, the WSJ added this chart for good measure: 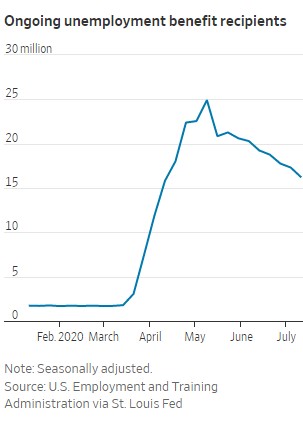 Actually, there was no improvement at all this week!

And what remains is the greatest labor market disaster in history. As Wolf Richter observed in his excellent post on the heels of the DOL (Department of Labor) report:

If you read this morning or heard on the radio that 16.2 million people were claiming unemployment insurance – the “continued claims” – and you thought that there were only 16.2 million people who claimed unemployment benefits, you fell victim to lazy misreporting in the media, by reporters or bots that didn’t read the Labor Department’s press release beyond the second paragraph.

4 responses to “Jobless Thursday – How the Donald Is Making America Poor Again, by David Stockman”