Obesity is a prevalent coronavirus comorbidity. From Sarah Boseley at theguardian.com: 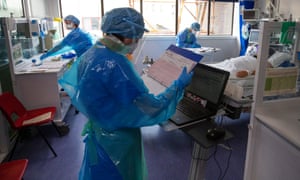 The Covid intensive care unit at Western general hospital in Edinburgh. People with obesity were found to be 74% more likely to be admitted to intensive care. Photograph: Murdo MacLeod/The Guardian

Obesity increases the risk of dying of Covid-19 by nearly 50% and may make vaccines against the disease less effective, according to a comprehensive study using global data.

The findings, which the lead researcher described as “scary”, show that the risks for people with obesity are greater than previously thought.

The study – a collaborative effort between the University of North Carolina (UNC), Saudi Health Council and World Bank – will increase pressure on governments to tackle obesity, including in the UK where Boris Johnson has put himself at the head of a drive to reduce the nation’s weight.

It emerged ahead of a report from the Institute for Public Policy Research that calls on the government to go further than its recent initiatives, which include restrictions on junk food advertising and supermarket offers.

The thinktank says a giant leap, akin to progress on sanitation in Victorian times, is needed to bring down obesity levels that shorten lives by causing heart conditions, strokes, type 2 diabetes and cancers, and impose a huge cost on the NHS.

It urges the government to employ a combination of taxes and subsidies, and proposes a new non-essential food levy of 8% on unhealthy foods that exceed a certain energy density or calorie count. Such taxes have worked in Mexico and Hungary, where people are eating less of such foods and manufacturers are reformulating their products to be healthier.

The prime minister hit out last year at “sin taxes” such as the UK’s sugary drinks levy, but his own spell in intensive care with Covid-19, which he blames on his weight, has convinced him that tough measures are needed to reduce obesity levels. It is understood that even taxes are no longer off the table.

This entry was posted in Medicine, Science and tagged Covid-19, Covid-19 comorbities, Obesity. Bookmark the permalink.