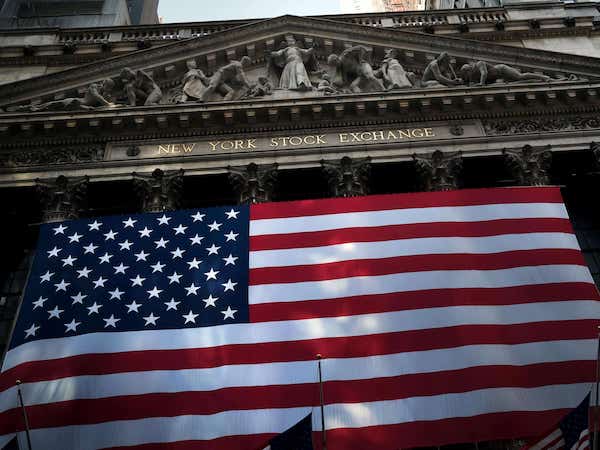 Coming in dead last, of course, is not entirely the Donald’s doing, try as he did. The fact is, the US economy was sinking under the dead weight of $77 trillion of public and private debt and the decades of public waste and private malinvestment this debt explosion enabled. Now, Donald’s wrong-headed sponsorship of Lockdown Nation via the recommendations of his malpracticing doctors and the public hysteria they fostered has delivered the coup d’ grace.

So, yes, it is the economy, stupid. That is to say, whoever wins on November 3rd is going to inherit an economy so battered, bruised, and freighted with speculative excess and debilitating debt that they are sure to go down in history as the President who made Herbert Hoover look like a winner.

International Man: The United States appears to be more divided than it has in anyone’s lifetime. Yet, politicians and talking heads on both sides of the aisle seem to wholeheartedly agree on the same destructive fiscal policy that includes money printing, sky-high debts, and freebies. What do you make of all this? What are the consequences for the dollar and for gold?

David Stockman: There is only one thing to do—get out of the casino and sell any security that moves or stands still. That’s because the bipartisan duopoly has lost all contracts with the principles of sound money, fiscal rectitude, and minimalist government intervention on which sustainable capitalist prosperity depends.

For instance, the GOP Senate is so oblivious to the monstrous fraud being perpetrated by the nation’s central bank that it can’t even muster the votes to put a single once and former sound money advocate—Judy Shelton—on the Fed Board of Governors.

Indeed, the Judy Shelton nomination failure is the monetary Rubicon. There is literally no hope left that our stupefied elected politicians will move to stop the unelected monetary politburo domiciled in the Eccles Building from utterly destroying the capital and money markets that are at the heart of the capitalist growth engine.

What lies ahead, therefore, is more years of massive monetization of the public debt and never before imagined fiscal profligacy on both ends of Pennsylvania Avenue. Already the public debt at $27.7 trillion stands at 138% of GDP, even as there is zero will in either party to brake its ascent.

At some point in the not-too-near future, confidence in the money-printing scam at the Fed will finally evaporate. Then, look out below. The financial sins of 50 years will come crashing all around.

International Man: When the COVID lockdowns first started, the government told us we needed a few weeks to “flatten the curve.” The idea was economic activity could be restarted relatively easily. Six months later, most economic activity is at a standstill. Is it possible for Main Street to bounce back? What type of long-term damage do you think this will have?

David Stockman: The damage will be immense and well nigh irreversible. That’s because never before–even during the full military mobilization of WWII—have we had this kind of draconian economic marshal law.

As it was, the US economy was already a hand-to-mouth cripple when the lockdowns came smashing down out of the blue in March. That is, businesses had no dry powder, having freighted down their balance sheets with cheap debt to fund stock buybacks and massively over-valued M&A deals; and, likewise, 80% of US households had borrowed to the hilt and had no rainy day funds to speak of.

Save for nearly $3.5 trillion of the Everything Bailouts, the US economy would be hemorrhaging already in a cascading chain of delinquencies, defaults, and payment lapses. There is no other outcome possible when the household and business sector are each laboring under $16 trillion of debt, and the government and financial sectors are carrying another $45 trillion between them.

Moreover, the massive infusion of borrowed funds from the virtually bankrupt US Treasury is not sustainable and is already beginning to measurably abate as the original bailout programs expire and even the spendthrift US Congress is unable to form a consensus on new measures to keep the Ponzi Scheme going.

Well, they might abjure. After all, the explosion of spending in April was theretofore unimaginable.

All this spending was for the purpose of holding harmless the tens of millions of workers and millions of small businesses sidelined by the writ of the Donald’s malpracticing doctors and the brutal shutdown orders of the Blue State governors and mayors they unleashed.

But to take out 10% of GDP through what amounted to economic martial law and backfill it with massive public borrowing was the height of derangement.

That’s because Lockdown Nation battered the economics and personal liberty of 267 million Americans under the age of 65, when their risk of serious illness or death from the COVID was tiny, even as 80% of deaths per the bloated CDC count occurred among the population 65 and older, which could have, and did, self-quarantine out of an abundance of personal medical precaution.

In that context, knocking $565 billion out of the GDP in the second quarter alone to prevent a marginal change in the mortality rate for the under-65 population was the very essence of national derangement and a reminder that current economic governance is so unhinged that recovery during the decade ahead—when the retired Welfare State-dependent population will grow from 55 million to 73 million—will be well-nigh impossible.

International Man: Recently, the Federal Reserve announced they would seek to create even more inflation, which means the cost of living is about to get more expensive. Why would any sane person want to do such a thing?

David Stockman: The short answer is that they obviously wouldn’t. The baleful truth is that our central bankers are lost in a miasma of groupthink that is devoid of any connection to sound money and the economic prosperity that flows therefrom.

Instead, the Fed has become the pathetic handmaiden of the den of gamblers that now operate on Wall Street. There is literally no minor stumble or tepid correction in the stock indices that fails to elicit a chorus of demands for more “stimulus” on Wall Street, but it is blatantly evident by now that the resulting massive injections of fiat credit into the bank accounts of the Fed dealers never leaves the canyons of Wall Street.

It simply inflates, inflates, and inflates again the value of existing debt and equity securities traded in the secondary market pits of pure speculation.

After all, that’s how we get the great ten-to-one anomaly. As it happened, since Greenspan’s Irrational Exuberance speech in December 1996, the nominal GDP has gained 136%, while the NASDAQ 100—the long-standing leading edge of the speculative mania—has gained 1,376%.

That’s madness. That’s the smoking gun that shows the degree to which the stock market has been ripped from its proper moorings in the actual income and profits of the Main Street economy.

It’s also the reason for another great anomaly. Namely, that the stock market, which originated as a curb where capital users came to raise investment funds from savers, has now been turned upside down. It is now a place where equity capital is massively and chronically liquidated in favor of massive increases in growth-throttling debt.

Thus, during the last 23 years, there have been only two quarters in which U.S. nonfinancial corporations raised equity capital on a net basis (i.e., new issuance exceeded buybacks).

Overall, $7.2 trillion of corporate equity has been liquidated, averaging some $315 billion per year.

Old-fashioned economists called this “eating your seed corn.” And it still is, whether the Keynesian money-pumpers at the Fed acknowledge it or not—and also notwithstanding the egregious, unearned windfalls that have accrued to speculators in the Wall Street casino.

For want of doubt, here is a very opposite picture. While the Fed-corrupted financial markets were busy shrinking the stock of equity capital, they were also inducing the C-suites to borrow hand over fist. Between December 1996 and the present, in fact, nonfinancial corporate debt has soared from $3.2 trillion to $10.5 trillion, or by 3.3 times.

In short, they are doing what no one in their right mind should be doing. The negative consequence in both the fiscal profligacy of the public sector and the financial engineering folly of the corporate sector speak for themselves.

International Man: In addition, the Fed said it will continue to manipulate interest rates to the lowest levels they have ever been. In other words, people can forget about earning any meaningful return on their savings. How does any prudent individual protect and preserve their savings in such an environment?

David Stockman: Buy gold and either forget or (if you are courageous) short the rest.