MSM’s narrative about the murderous Capitol mob has collapsed, but don’t let that get in the way of a good political lynching, by Tony Cox

What is the mainstream media going to do without Donald Trump to kick around? SLL puts the over/under on the bankruptcy or the first mainstream outlet as one year. From Tony Cox at rt.com: 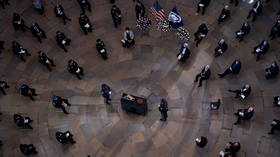 A memorial service is held for officer Brian Sicknick on February 3 in the US
Capitol Rotunda. © Reuters / Kevin Dietsch
As their dishonest narrative collapses around them, mainstream media outlets and Democrat politicians are trying to hold together their latest bid to destroy Donald Trump, but some of the lies are getting too big to shrug off.

I’m reminded of  the media-speak popularized during the Trump era – lightly used words or phrases that became ubiquitous in the talking points, like “violating norms” – especially the term “debunked.” In the eyes of MSM and their controllers, Trump was a president who needed to be debunked thousands of times. Whether it was about the size of his Inauguration Day crowd, the animal-like savagery of MS-13 gang-bangers or the fact that Haiti is “a s**thole”, any Trump claim had to be debunked, false or not.

When an obnoxious loudmouth constantly blurts out things that lift the skirt on the ruling class’ treachery, his voice must be discredited. And even if just part of his story can be attacked, the rest will be forgotten. It’s like a Jenga game where all the pieces automatically fall down when one is removed.

But the same standard doesn’t apply to the media’s own story lines. No matter how many times MSM and establishment politicians are exposed as liars — from the MLK bust in the Oval Office to the Russia collusion hoax — the people are supposed to keep believing the gist of their arguments. The Jenga tower can be levitating with entire floors missing, but the con artists insist that it’s still standing.