The treatment of people suspected of driving while intoxicated shreds the Constitution. From Eric Peters at ericpetersautos.com:

The presumption of innocence is something not paid much respect – or even given much thought – anymore. Everyone is guilty – of everything. No matter that you or I haven’t actually done anything.

It is just a matter of accusation. 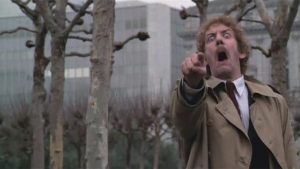 The finger now points at every driver – and soon, at every new car buyer – who is to be presumed “drunk” without the bother of conviction.

Or even a probable-cause-free sobriety checkpoint.

Senate Democrats – and some might-as-well-be Democrats who identify as Republicans – have inserted language in the $1 trillion “infrastructure” bill peristaltically making its way through the Senate colon that would require every new car sold within 10 years be equipped with what you used to have to be convicted of DWI to have to have installed in your car:

An alcohol-detecting interlock of some kind that disables the vehicle and prevents it from being driven by a “drunk” driver – the latter to be defined presumptively as every driver.

And on the basis of ever-attenuating standards of “drunkenness,” which now encompasses the drinking of as little as a single beer or even less, in states that have lowered their Blood Alcohol Content (BAC) thresholds defining it at .05 or even less (for those under 21). No evidence of actual impairment being necessary to convict.