There are a lot of job openings for anyone who would rather work than collect money from the taxpayers via the government. From Wolf Richter at wolfstreet.com:

And many people quit their job to take a better job with higher starting wage & signing bonus, offered by desperate employers.

All the evidence – data and anecdotal – has been pointing at the same weird phenomenon: Employers are facing a “labor shortage,” even as 13 million people still claim some form of state or federal unemployment compensation, because millions of people who used to work and who could work, cannot work now or still do not want to work at the pay and benefit packages offered.

So here is another piece of this phenomenon: A record spike in unfilled job openings, along with a large number of people who quit an old job to take on a new job, incentivized by aggressive hiring efforts, such as raised wages, hiring bonuses, incentives, and better benefits.

Total unfilled job openings spiked by 590,000 in June to 10.1 million openings, seasonally adjusted, and to 10.3 million not seasonally adjusted, blowing out all prior records, up by 42% from June 2019, according to the JOLTS report by the Bureau of Labor Statistics today: 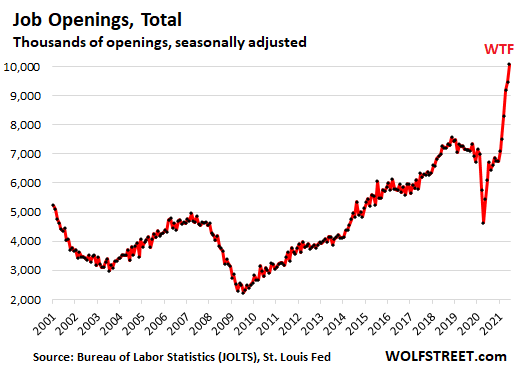 Faced with difficulties in filling open positions, employers are engaging in aggressive hiring efforts that include increased starting wages, hiring bonuses, other bonuses, better benefits, etc.  – and there have been reports to this effect all over the place, from small companies to major employers such as Walmart and Goldman Sachs.