We can’t sit this out: we’re dealing with a ‘criminal conspiracy’ to usher in global socialism, by Dr. Douglas Farrow

Doctors must fight conspirators’ fear mongering and their plans to rule the world. From Dr. Douglas Farrow at lifesitenews.com: 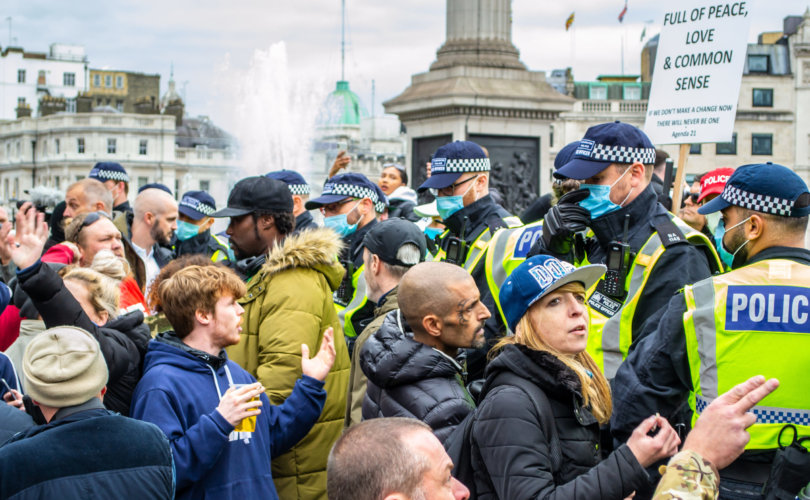 Police and anti-lockdown protesters clash in September 2020 in the UK.

(Edward Pentin) – Editor’s note: The following is an essay written by Professor Douglas Farrow, which was published on Edward Pentin’s site.

Jeremy Isaacs’ The World at War includes an interview in which Hitler’s personal secretary, Traudl Junge, reports that the Führer, in his last days, replied to a question about the future of Germany as follows: “I believe there will not any more be a National Socialist Party; the idea will die with me. But maybe in a hundred years or so there will arise another National Socialist idea, like a religion.”[1]

It has not yet been a hundred years, but I begin to see what Hitler meant. From the South Pacific to the North Atlantic, even democratic countries such as Australia and Canada are rapidly going full Nazi.[2] We’ve been living for eighteen months now under a “health emergency” in which rule by fiat has replaced the rule of law. In Australia, rubber bullets are flying to suppress resistance to this perpetual state of exception.[3]

Who knew that constitutional rights could be suspended for such a long and indefinite period, with routine renewal of emergency powers by the same people who wield them? Who knew that this could be done in the name of Health and Safety when more people are dying as a consequence of the special measures than are dying from the health threat that putatively requires them? Who knew that to “safeguard” healthcare, the government could cancel much of it or make it difficult to access; build and staff quarantine camps instead of hospitals, when neither are needed; impose coercive mandates that violate the most basic principles of the Nuremberg Code; dismiss physicians and healthcare workers who dissent from the dirty tactics and dare to expose government lies?

The most remarkable thing, however, is the stupendous credulity that characterizes significant tracts of the population, especially in academia, where our “critical minds” are said to reside. The credulity and the cowardice; for when it comes to enrolling in the religion of fear, the universities have vied with each other to be first in line and to teach that religion to their students.

2 responses to “We can’t sit this out: we’re dealing with a ‘criminal conspiracy’ to usher in global socialism, by Dr. Douglas Farrow”