FRED REED: Peering under the Rock: Checking the Origins of American Foreign Policy

Fred Reed sets the record straight on Russia, Putin, Ukraine, and the war. From Reed at barelyablog.com:

The encirclement of Russia by NATO (i.e. America) is ‘very roughly equivalent to having Russian forces in El Paso Tijuana, and Toronto’ 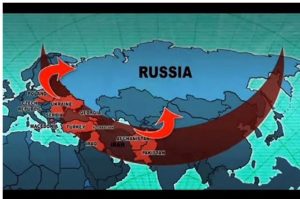 Given that pushing a third of Americans are functionally illiterate or close, that twenty percent think that the sun revolves around the earth, and  seventy percent cannot name the three branches of the federal government, it isn’t surprising that few have much idea of how the war in Ukraine came about. What does surprise is that so few of the intelligent and schooled have much more grasp. Many of these, friends, say that Putin tries to reconstitute the Soviet Union, that Russia is a threat to NATO, that Putin is (sigh) Hitler, and everything from inflation to falling hair is Putin’s fault. No.

Let’s look at things from the point of view of people who pay more attention:

In 1991, the Soviet Union collapsed and Reagan promised Gorbachev that NATO would not move eastward. As a well-known Russian has said, the United States is not agreement capable. It soon began moving NATO eastward, increasing from thirteen countries in NATO to thirty today in an obvious military encirclement of Russia. In 2014 the US attempted a coup in Ukraine aimed at putting an American puppet in Kiev but it didn’t work and Russia retrieved the Crimea. For the next eight or so years NATO, meaning America, trained Ukrainian forces in preparation for the war we now have. This is well known to military analysts and students of eastern Europe.

During this time Russia said over and over and over and over that it wasn’t going to allow Ukraine in NATO, de facto or de jure. This would put American forces on Russia’s border and in Crimea, as well as American naval forces in Sebastopol. American hypersonic nuclear missiles would have been about five minutes of flight time from Moscow.

One response to “FRED REED: Peering under the Rock: Checking the Origins of American Foreign Policy”