Iran Decided To Put Maximum Pressure On Trump – Here Is How It Will Do It, by Moon of Alabama

This article is speculation, but the scenario it sketches is certainly plausible…and chilling. From Moon of Alabama at moonofalabama.org:

Thirteen month ago the United States launched a total economic war against Iran. It demands its capitulation. Now Iran decided to respond in kind. It will wage a maximum pressure campaign on U.S. economic interests until the Trump administration concedes its defeat. Shipping in the Middle East will soon become very hazardous. Oil prices will go through the roof. Trump will be trapped between two choices neither of which he will like.

In early May 2018 U.S. President Trump broke the nuclear deal with Iran and sanctioned all trade with that country. Iran reacted cautiously. It hoped that the other signatories of the nuclear deal would stick to their promises and continue to trade with it. The year since proved that such expectations were wrong.

Under threat of U.S. sanctions the European partners stopped buying Iranian oil and also ended their exports to it. The new financial instrument that was supposed to allow payments between European countries and Iran has still not been implemented. It is also a weak construct and will have too little capacity to make significant trade possible. Russia and China each have their own problems with the United States. They do not support trade with Iran when it endangers their other interests.

Meanwhile the Trump administration increased the pressure on Iran. It removed waivers it had given to some countries to buy Iranian oil. It designated a part of the Iranian armed forces, the Revolutionary Guard Corp (ICRG), as a terrorist entity. On Friday it sanctioned Iran’s biggest producer of petrochemical products because that company is alleged to have relations with the ICRG.

The strategic patience Iran demonstrated throughout the year since Trump killed the deal brought no result. Trump will stay in power, probably for another five and a half years, while Iran’s economic situation continuous to get worse. The situation requires a strategic reorientation and the adoption of a new plan to counter U.S. pressure.

On the strategic side a long term reorientation in four different fields will counter the effects the economic war on Iran. Foreign imports to Iran will be reduced to a minimum level by increasing production at home. Iran will ally with no one, not even China and Russia, as it recognizes that relying on partners has no value when those partners have their own higher interests. The third step is to loosen interior pressure on the ‘reformist’ who argued for a more ‘western’ orientation. Trump, and the cowardice of the Europeans, have proven that their arguments are false. The last measure is to reorientate exports from global oil trade to other products, probably derived from oil, and to neighboring countries.

All four steps will take some time. They are at large a reorientation from a globalization strategy to a more isolationist national one. Some first steps of this new plan are already visible. A common bank will be set up by Syria, Iraq and Iran to facilitate trade between those countries.

Trump continues to call for negotiations with Iran but he can accept nothing but a total capitulation. Trump also proved that the U.S. does not stick to the agreements it makes. There is therefore no hope for Iran to achieve anything through negotiations. There is only one way to counter Trump’s maximum pressure campaign and that is by putting maximum pressure on him.

Neither Washington, nor the anti-Iranian countries in the Middle East, nor the other nuclear deal signers have so far paid a price for their hostile acts against Iran. That will now change. 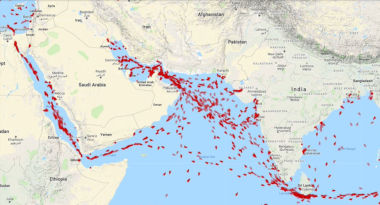 via Tanker Trackers – biggerIran will move against the interests of the U.S., Israel, Saudi Arabia and the UAE. It will do so in deniable form to give the U.S. and others no opening for taking military actions against it. Iran has friends in various countries in the Middle East who will support it with their own capabilities. The campaign Iran now launches will also create severe damage for other countries.

In mid 2018, after Trump began to sanction Iran’s oil exports, its leaders explained how it would counter the move:

“If one day they want to prevent the export of Iran’s oil, then no oil will be exported from the Persian Gulf,” [Rouhani] said.

In mid May 2019, one year after Trump destroyed the nuclear deal, a demonstration of capabilities damaged four tankers which anchored near Fujairah in the UAE. There was no evidence to blame the attack on Iran.

The incident was a warning. But the U.S. ignored it and increased the sanction pressure on Iran.

Yesterday two tankers with petrochemical products were attacked while crossing the Gulf of Oman. Coming only a few days after Trump sanctioned Iran’s petrochemical exports points to Iran’s involvement. But again no evidence was left in place to blame the incident on Iran.

The U.S. published a grainy black and white video which it says shows an Iranian Search and Rescue crew removing an unexploded limpet mine from one of the tankers. No mine in visible in the video. The Iranian crew seems to inspect the damage on the tanker.

The U.S. itself admits that the video was taken several hours after the incident. The U.S. also says that one of its ships was nearby. Why did it take no steps to remove the claimed mine itself?

Meanwhile the owner of the Kokuka Courageous, one of the stricken ships, said that the damage to its ship was not caused by mines but by drones:

Two “flying objects” damaged a Japanese tanker owned by Kokuka Sangyo Co in an attack on Thursday in the Gulf of Oman, but there was no damage to the cargo of methanol, the company president said on Friday.
…
“The crew told us something came flying at the ship, and they found a hole,” Katada said. “Then some crew witnessed the second shot.”

Katada also rejected speculation that the tanker, which sailed under the flag of Panama, was attacked because it was a Japanese owned vessel:

“Unless very carefully examined, it would be hard to tell the tanker was operated or owned by Japanese,” he said.

Despite the obvious lack of knowledge of who or what caused the incident the U.S. immediately blamed Iran:

Secretary Pompeo @SecPompeo – 18:27 UTC – 13 Jun 2019It is the assessment of the U.S. government that Iran is responsible for today’s attacks in the Gulf of Oman. These attacks are a threat to international peace and security, a blatant assault on the freedom of navigation, and an unacceptable escalation of tension by Iran.

Javad Zarif @JZarif – 12:11 UTC – 14 Jun 2019That the US immediately jumped to make allegations against Iran—w/o a shred of factual or circumstantial evidence—only makes it abundantly clear that the #B_Team is moving to a #PlanB: Sabotage diplomacy—including by @AbeShinzo—and cover up its #EconomicTerrorism against Iran.

I warned of exactly this scenario a few months ago, not because I’m clairvoyant, but because I recognize where the #B_Team is coming from.

To say that the attacks were provocations by the U.S. or its Middle East allies is made easier by their evident ruthlessness. Any accusations by the Trump administration of Iranian culpability will be easily dismissed because everyone knows that Trump and his crew are notorious liars.

This cat and mouse game will now continue and steadily gain pace. More tankers will get damaged or even sunk. Saudi refineries will start to explode. UAE harbors will experience difficulties. Iran will plausibly deny that it is involved in any of this. The U.S. will continue to blame Iran but will have no evidence to prove it.

Insurance for Middle East cargo will become very expensive. Consumer prices for oil products will increase and increase again. The collateral damage will be immense.

All this will gradually put more pressure on Trump. The U.S. will want to negotiate with Iran, but that will be rejected unless Trump rejoins the nuclear deal and lifts all his sanctions. He can not do that without losing face and his allies. By mid 2020 the maximum pressure campaign will reach its zenith. Oil prices will explode and the U.S. will fall into a recession. The world economy will tank and everyone will know who caused the underlying issue. Trump’s reelection will come into doubt.

There will also be pressure on Trump to take military action against Iran. But he knows that a war would be equally disastrous for his re-election chances, and for the United States. A war against Iran would put the whole Middle East in flames.

One response to “Iran Decided To Put Maximum Pressure On Trump – Here Is How It Will Do It, by Moon of Alabama”