The weekly VAERS numbers and more. From Megan Redshaw at childrenshealthdefense.com:

Data released Friday by the Centers for Disease Control and Prevention (CDC) showed that between Dec. 14, 2020 and Aug. 27, 2021, a total of 650,077 total adverse events were reported to VAERS, including 13,911 deaths — an increase of 284 over the number of deaths reported the previous week.

There were 85,971 reports of serious injuries, including deaths, during the same time period — up 1,505 compared with the previous week. 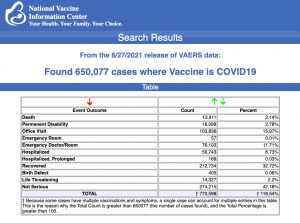 This entry was posted in Medicine, Science and tagged VAERS report. Bookmark the permalink.

One response to “650,000+ Injuries Reported After COVID Vaccines, as Biden, FDA Spar Over Boosters, by Megan Redshaw”