Ukraine – Lights Out, No Water And Soon No Heat, by Moon of Alabama

But keep in mind, Ukraine is winning. From Moon of Alabama at moonofalabama.org:

Previous attacks had limited the distribution capacity to some 50% of demand. Controlled blackouts over several hours per day allowed to give some electricity for a few hours to most parts of the country. The attack today created a much larger problem. Not only were distribution networks attacked but also so the elements that connect Ukraine’s electricity production facilities to the distribution network. All four nuclear power stations of Ukraine with their 15 reactors are now in shutdown mode. 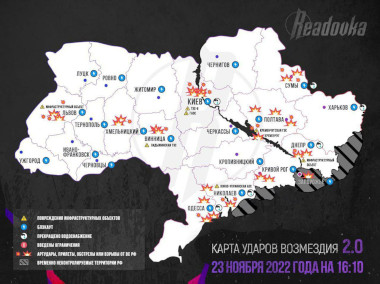 biggerKiev along with most other cities of Ukraine no longer has electricity.

Moldavia is likewise effected as it received some 20% of its electricity from Ukraine. When the Ukrainian network shut down the only local thermal power plant shut down too. It is likely that it can be switched on again but that can be a complicate process.

Limited electricity imports from the European system into Ukraine may still be possible but that electricity would only be available in Ukraine’s western cities.