America: A Prisoner of Our ‘Allies’, by Justin Raimondo

Maybe our “allies” can use some of the money they receive from tariffs on US goods to start paying more for their own defense. From Justin Raimondo at antiwar.com: 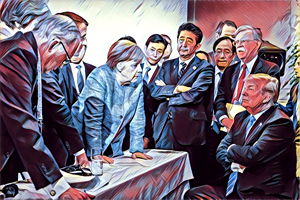 All the Very Serious People are tweeting and retweeting this “iconic” photo of Trump surrounded by the Euro-weenies, with Angela Merkel seeming to lecture the President while the rest of our faithless “allies” look on. It’s “America Alone” –   the visual representation of the internationalist worldview: Trump’s policy of “America First” is “isolating” us, and, according to clueless leftists like Michael Moore, Merkel is now the “leader” of the “free world.”

This last is good news indeed, for if Merkel is the new leader of the “free world” then the stationing of 35,000 US troops in Germany – at a cost of billions annually – is no longer required and we can bring them home. This also means Germany, rather than the US, will be sending troops all over the world to fight “terrorism” – a move that is sure to cause consternation in certain regions with a history of German intervention, but hey, somebody has to do it!

The political class is screaming bloody murder over Trump’s performance at the G-7 meeting in Canada, where he reportedly spent most of the time detailing how much the US was paying for the defense of our vaunted “allies,” not to mention the high tariffs imposed on American goods. He then proposed a “free trade zone” in which member countries would drop all tariffs, subsidies, and other barriers to trade: the “allies” didn’t like that much, either. Nor did the alleged advocates of free trade here in the US give him any credit for ostensibly coming around to their point of view. Which reminds me of something Murray Rothbard said about this issue: “If authentic free trade ever looms on the policy horizon, there’ll be one sure way to tell. The government/media/big-business complex will oppose it tooth and nail.”

Of course the Euro-weenies don’t want real free trade: after all, they practically invented protectionism. What they want is a free ride, at Uncle Sam’s expense, and the reason they hate Trump is because they know the freebies are over. However, what really got the Usual Suspects frothing at the mouth was Trump’s insistence that Russia be readmitted to the G-8:

To continue reading: America: A Prisoner of Our ‘Allies’