China’s Growing Economic Miracle…(Collapse). Or… Everyone Pays the Piper! by Brett Redmayne-Titley

Nobody knows just how much of China’s economic miracle was bought with a credit card. We may soon find out. From Brett Redmayne-Titley at watchingromeburn.uk: 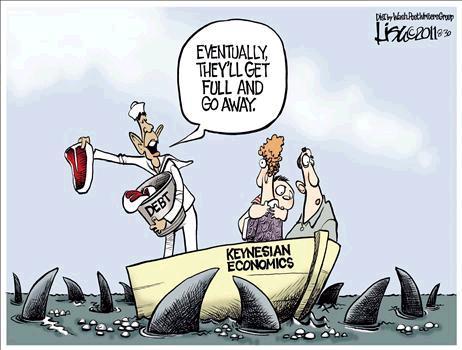 In emulating the American economic raison d’etre,China has attempted to develop its unique capitalist model while ignoring that it too will soon suffer the same fate for the same reason: Unsustainable debt.  When examining the recent realities of Chinese banking and finance over the past year it seems the steam that president Xi Jinping touts as powering the engine of his purported economic miracle of a master-planned economy is only a mirage, now almost completely evaporated before his eyes.

Like the many other similarly foolish western nations, China seeks only one path out of this fiscal death spiral, one that will likely spell doom and/or revolution in many countries soon: More debt.

END_OF_DOCUMENT_TOKEN_TO_BE_REPLACED

Other than some minor regulatory relief, Trump’s policies have hurt more than helped the US economy. From David Stockman at internationalman.com:

International Man: Trump’s America First economic policy seemed to help him win the 2016 election. He promised to renegotiate America’s trade deals and bring jobs back to the United States.

As president, Trump has used tariffs and other protectionist measures to try to reduce the trade deficit.

What do you think of Trump’s trade policies and tariffs?

David Stockman: The trade policies are idiotic. They haven’t improved the trade deficit. And have caused other problems.

We got the numbers in now for 2018 and we had the largest trade deficit in history!

The first point is that his trade policies are not accomplishing anything. In fact, it’s thrown many sectors under the bus. Manufacturers that import components from China are now paying much higher prices because of the tariff charge.

Farmers have gotten thrown under the bus in a major way. The whole agricultural export system that was patiently developed over many, many years has essentially been destroyed through retaliation.

END_OF_DOCUMENT_TOKEN_TO_BE_REPLACED

For 2020, three contestants are at the starting line in the race to see what initiates a global credit crisis: European banks, the repo market, or Chinese banks. From Tim Staermose at sovereignman.com:

The Chinese government isn’t exactly famous for its honesty and transparency.

So when the Chinese regulators are starting to openly report trouble in their banking system, it’s time to take notice.

According to the People’s Bank of China (PBOC)’s “2019 China Financial Stability Report,” 586 out of 4,379 Chinese lenders were officially deemed to be “high risk”.

Did you know? You can receive all our actionable articles straight to your email inbox… Click here to signup for our Notes from the Field newsletter.

But that overall figure, bad as it is, may be masking the true extent of the problem.

According to the same report, over one third of rural lenders are deemed to be “high risk.” One in three banks in rural China. Hmmm.

And this lack of confidence is beginning to cause bank runs.

In May, the government took over troubled Baoshang Bank in Inner Mongolia – the first such government intervention to nationalize a private Chinese financial institution in more than 20 years.

A joint bailout by three state-owned financial institutions was also organized for the Bank of Jinzhou in July.

END_OF_DOCUMENT_TOKEN_TO_BE_REPLACED

Did Macron and Johnson Negotiate a Hard Brexit in October? by Tom Luongo

A hard Brexit might be in both Macron’s and Johnson’s interests. From Tom Luongo at tomluongo.me:

Something odd is happening with Brexit. It looks like Prime Minister Boris Johnson is pushing for a hard Brexit much to my surprise.

Johnson’s strong showing in the recent election which secured the Tories its biggest majority since the days of Margaret Thatcher should have set the stage for the great Brexit bait and switch.

This has been my argument for months since Johnson became the front-runner to replace Theresa May. All Johnson had to do was manipulate events to get a majority which marginalizes the hard Brexiteers of the European Research Group (ERG).

Then he could undermine Brexit by giving back all the concessions during his subsequent negotiations with the EU over a trade deal.

This analysis should have been the correct one given the staunch opposition by the political elite in the U.K. to Brexit.

But something has changed.

END_OF_DOCUMENT_TOKEN_TO_BE_REPLACED

The Year in Bad Ideas, by Max Gulker

The year almost past saw the ascendence of some uncommonly stupid ideas. From Max Gulker at aier.com:

At first glance 2019 was a rough year for anyone in favor of an economy and society guided from the bottom up by people with the freedom to exchange, cooperate, and think as they choose. The highly visible left flank of the Democratic Party, fully embracing socialism in name and approach, erupted with proposals that would drastically change the country in ways they intend and many more in ways they do not. Meanwhile, the Republican Party’s debt from its Faustian bargain with President Donald Trump began to come due.

What can we learn from bad ideas? Plenty, if we approach them with curiosity rather than assumed intellectual or moral deficiency on the part of those trafficking in them. The truth, that people have a really hard time understanding the benefits of free markets and bottom-up organization, is both difficult and galvanizing. Free-market ideas don’t really have a place in the current incarnation of our two-party system. We’re free agents and that can open a world of new possibilities if we let it.

END_OF_DOCUMENT_TOKEN_TO_BE_REPLACED

It’s not usually a good sign when money is leaving a country. From Mike “Mish” Shedlock at moneymaven.io:

China is fighting “abnormal” cash flows. It’s not surprising in the least.

Please consider Money has been leaving China at a record rate. Beijing is battling to stem the tide

Money was leaving the country at a record clip earlier this year through unauthorized channels, according to analysts. That’s bad news for China, which needs to keep financial reserves high to maintain confidence in its markets.

The State Administration of Foreign Exchange, a key government regulator, said Sunday that its most important job next year is to prevent major financial risks, avoid “abnormal” capital flows across its borders and crack down on illegal trading activities.

“We need to fight a critical battle” to defuse financial risks and maintain market stability, SAFE said in an statement. The pledge was an unusually strong one for the agency, which deployed the kind of military language more often used by top leaders in China.