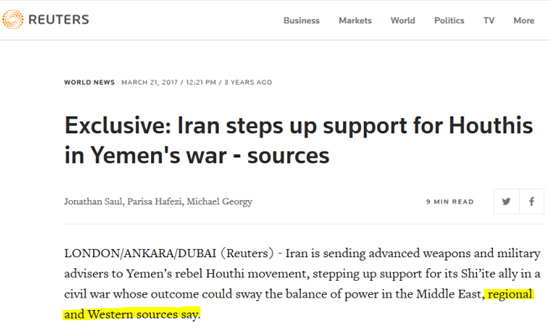 Mainstream media parroted the government talking point that Iran was supporting the Houthis by endlessly calling the Houthis, “the Iranian backed Houthis” in articles and major news broadcast. As the war progressed and the death toll rose, the international community became numb to the violence in Yemen. The United Nations claimed that the death toll in Yemen was static at 10,000 for three straight years.

When international bodies such as the United Nations purposefully mislead the public with disinformation involving war, it highlights a strategy that has been a tactic of the Military-Industrial Complex since Vietnam. It is in the international community’s best interest to censor the war in Yemen, France, Italy, and the UK contributed and profited from this war as well as Germany, and Norway who both later stopped selling arms to Saudi Arabia after public outrage. Each of these countries profited from the atrocities in Yemen while using the excuse that the Houthis were an Iranian proxy and stating that they were “combating Iranian aggression.”

Not only is there no direct evidence that the Houthis are an Iranian proxy, but a lot of evidence to suggest that they aren’t. The Houthis do not adhere to one particular religion, although the majority center around the Zaydi branch of Islam. Iran built a theocratic nation on strict Twelve Imam Islam. The Houthis believe in social justice, anti-imperialism, nationalism, and federalism. Iran does not believe in these things, Iran is not a federation or a beacon of social justice, and in the Middle East, ideology is everything.

Yemen is a Sunni majority, with 75% of the citizens in Yemen Identifying as Sunni and 25% of the population identifying as Shi’ite. The Houthis have been a representation of this minority in Yemen since 1994 and remained an unarmed political movement until 2004. Zaydi led governments ruled over Yemen from the year 960 to 1962, and that is not a typo. This ideology is almost exclusive to Yemen and practiced for over one thousand years. The narrative push by the state department and talking-heads in media that the Houthis are a rebel group that sprouted up in 2014 due to funds and arms allegedly provided by Iran is negligent journalism and myopic diplomacy.

Why falsely claim that the Houthis are an Iranian proxy and use this as an excuse to sell weapons to Saudi Arabia as they bombarded Yemen for the last five years? Because the notion of the Houthis being an Iranian proxy fits the overall ongoing narrative that Iran is the bad guy and must be combated on all fronts. So even though there are active groups of ISIS and al-Qaeda in Yemen, these groups are only mentioned as an afterthought, with the Iranian backed Houthis being the main talking-point surrounding the war in Yemen.

Disinformation and different arrays of propaganda are used to confuse and mislead the public, especially when those spreading the propaganda are ashamed of their actions. The most recent data from Yemen estimates that 102,000 have been killed by direct violence in Yemen, not including those that have been died from malnutrition. Approximately 20,000 have been killed this year alone, making it the deadliest year in Yemen since the war started. Saudi Arabia targeted civilians over 8,000 times since they intervened in 2015. These war crimes were not carried out in a secretive way they were committed in the open for the world to see, and instead of standing up to Saudi Arabia for committing these atrocities in Yemen global powers like the US, UK, France, and Germany came together to supply Saudi Arabia with means to decimate Yemen.

Now the United States has admitted that the Houthi’s are not an Iranian proxy. Brian Cook the U.S. Special Representative for Iran stated that “Iran does not speak for the Houthis, nor has the best interests of the Yemeni people at heart.” Denise Natali, the Assistant Secretary of State for Conflict and Stabilization Operations stated: “not all Houthis support Iran.”

Iran initially warned the Houthi’s not to take over Sanaa and to halt their coup attempt. Kate Kizer the policy director at Win Without War told the website The National Interest that “It’s about time the Trump administration woke up to the reality that the Houthis are not an Iranian proxy – something anyone who knows Yemen has known all along. The State Department’s sudden about-face on the Houthis completely undermines the administration’s arguments as to why fueling war crimes and the world’s largest humanitarian crisis in Yemen is justified.”

Joziah Thayer is a researcher with the Pursuance Project. He founded WEDA in 2014 to combat mainstream media narratives. He is also an antiwar activist and the online organizer behind #OpYemen. This article was originally published on his website and is reprinted with permission.

One response to “US Admits Yemen’s Houthis Aren’t an Iranian Proxy as the Death Toll Climbs, by Joziah Thayer”