It Is A Time Of Crisis And U.S. Foreign Policy Is Becoming Unhinged, by Moon of Alabama

Never let a good opportunity to conduct deranged foreign policy when the world is preoccupied with a crisis go to waste. From Moon of Alabama at moonofalabama.org:

The Trump administration is reacting to the pandemic stress by lashing out at perceived internal and external enemies. Secretary of State Mike Pompeo is leading the external onslaught.

UN Secretary General Antonio Guterres has called for an “immediate global ceasefire” to focus on fighting Covid-19. He has appealed for the “waiving of sanctions that can undermine countries’ capacity to respond to the pandemic.”

But Washington is not listening.

Requests from Venezuela and Iran for emergency IMF loans to buy medical supplies were blocked by U.S. interventions.

Just a month ago Pompeo announced an increase of sanctions against Iran. The sanctions block money transfers. They make it impossible for Iran to import the medical equipment it urgently needs to counter the epidemic.

While the U.S. renewed the sanction waiver which allows Iraq to import electricity and gas from Iran the waiver is now limited to only 30 days. One third of Iraq’s electricity depends on those imports from Iran and, if the waiver is not renewed, its hospitals will go dark just when the epidemic will reach its zenith.

Parts of the Trump administration are even pressing for a wider war against alleged Iranian proxy forces in Iraq:

The Pentagon has ordered military commanders to plan for an escalation of American combat in Iraq, issuing a directive last week to prepare a campaign to destroy an Iranian-backed militia group that has threatened more attacks against American troops.But the United States’ top commander in Iraq has warned that such a campaign could be bloody and counterproductive and risks war with Iran.
…
Some top officials, including Secretary of State Mike Pompeo and Robert C. O’Brien, the national security adviser, have been pushing for aggressive new action against Iran and its proxy forces — and see an opportunity to try to destroy Iranian-backed militia groups in Iraq as leaders in Iran are distracted by the pandemic crisis in their country.

Military leaders, including Defense Secretary Mark T. Esper and Gen. Mark A. Milley, the chairman of the Joint Chiefs of Staff, have been wary of a sharp military escalation, warning it could further destabilize the Middle East at a time when President Trump has said he hopes to reduce the number of American troops in the region.

The plan is lunatic. One can not “destroy” Kataib Hezbollah and other Iraqi Shia groups which Iran helped to build during the war against ISIS. These groups are part of political parties with deep roots in the Iraqi society.

France, Italy and the Czech Republic have started to withdraw from Iraq. Denmark is also leaving and the UK is removing 50% of its force. There are less then 5,000 U.S. soldiers in Iraq and a war on Kataib Hezbollah could mobilized hundreds of thousands Iraqis to fight against the U.S. occupation. Such a war would also involve Iran and the U.S. would certainly lose it.

The U.S. has currently two aircraft carrier groups in the Arab sea to threaten Iran. But those ships are of no use right now. They are ‘cruise ships with guns’. Nuclear powered five billion dollar petri dishes for novel coronavirus outbreaks. Two U.S. carrier groups in the Pacific are already out of action because they have larger outbreaks on board. It is only a question of time until the other carriers follow.

It is not only Iraq and Iran the U.S. is aiming at. The U.S. State Department cut its contributions to health care in Yemen just in time of the highest need:

Officials with the United States Agency for International Development said the decision to halt funding, reported earlier by The Washington Post, included exceptions for “critical, lifesaving activities, including treatment of malnutrition as well as water, sanitation and hygiene programs aimed at keeping people healthy and staving off disease.”But humanitarian officials said the agency’s exceptions did not provide for continued funding of basic health care programs, which are heavily reliant on foreign aid, and did not seem to take into account what might occur when the coronavirus begins to spread.

Not happy with only messing up the Middle East the State Department also renewed its assault on Venezuela. On Thursday the Justice Department announced charges of ‘Narco-Terrorism, Corruption, Drug Trafficking and Other Crimes’ against President Nicolas Maduro and 14 former or current officials. It put up a $15 million reward for Maduro’s arrest.

It alleges that Maduro worked with Columbian cartels to smuggle cocaine through Venezuela.

But here is a map of smuggling routes from U.S. ally Columbia where most of the cocaine is produced. It was shown during a Congress hearing. Whatever is smuggled through Venezuela is a tiny share compared to the huge stream that comes through the Pacific. 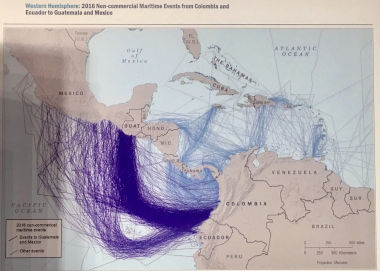 Whoever wrote and signed of the indictment also made a huge mistake. The charges included Clíver Antonio Alcalá Cordones, a former General in the Venezuelan armed forces, and put a $10 million reward on his head.

Alcalá Cordones is no friend of Maduro. He retired in 2013 when Maduro was elected after Hugo Chávez had died. Alcalá Cordones fled to Colombia from where he supported the U.S. chosen clown Juan Guaidó as self proclaimed president of Venezuela.

After the Justice Department indictment against him he came out and revealed that he was involved in coup plans in support of Juan Guaidó:

Alcalá is implicated in a recent plot to attack the Maduro government. On March 24, Colombian authorities seized a truck full of weapons and military equipment, including 26 assault rifles, worth $500,000. Venezuelan intelligence services linked the weapons to three camps in Colombia where paramilitary groups of Venezuelan deserters and U.S. mercenariesare training to carry out attacks against Venezuela. According to Venezuela’s Communication Minister Jorge Rodríguez, these groups were planning to take advantage of the COVID-19 pandemic to attack military units and plant bombs. He also linked the groups to Alcalá.

These allegations proved to be correct, as Alcalá, in a video he posted online hours after the indictments, admitted that the weapons were under his command. He further admitted that the weapons were purchased with funds given to him by Juan Guaidó, with whom he allegedly signed a contract.  Additionally, Alcala claimed that the operation was planned by U.S. advisors, with whom he supposedly met at least seven times. Aclalá also alleged that Leopoldo López, the founder of Guaidó’s party Voluntad Popular who was sprung from house arrest during Guaidó’s April 30 attempted insurrection, had full knowledge of the terror plot.

As a result of these videos, Venezuela’s Attorney General has opened an investigation into Juan Guaidó for an attempted coup.

The U.S. blew it by accusing the one man that was willing to help its chosen clown and by not informing him before the indictment came out. That man then freaked out and blew the whistle. This is now threatening the whole opposition plan the U.S. concocted with Guaidó and the men behind him.

On Friday Alcalá Cordones decided it was unsafe for him to stay in Colombia. He ‘called up‘ the U.S. Drug Enforcement Administration and gave himself up. He was extradited to New York and will now become a ‘witness’ against Maduro who he has publicly opposed in the first place.

This chaos was certainly created by Elliott Abrams, the neoconservative U.S. Special Representative for Venezuela. Abrams has a talent for messing things up.

U.S. foreign policy during the crisis has been abysmal. The U.S. angered China, the biggest producer of urgently needed masks and drugs, by calling the virus  “Wuhan virus” or “Chinese virus”, a practice that stopped only after a phone call between Trump and Xi Jinping. It angered Germany when it tried to buy exclusive rights for a potential vaccine that is being developed there. Requests for support by multiple European allies were left unanswered while China and Russia mobilized to help over 80 countries. Meanwhile Pompeo chastised Italy for accepting Cuban drugs and doctors.

There will be a large cost to pay for this when the pandemic is over. The U.S. has exposed itself as unreliable ally, as war mongering moron even at the worst time and as incapable of helping its own citizens.

China on the other hand defeated the epidemic at home and now helps defeating it wherever it can. This is going to be its century.