Yes, We are Headed for Violent Civil War, by Jeff Costello

There probably won’t be a civil war for control of the government, but rather a war for secession. Either way, political violence is no longer beyond the pale for a growing number of Americans. From Jef Costello at counter-currents.com:

On October 1st, with little fanfare, Politico published an extraordinary opinion piece that may be the most important thing I’ve read all year. Titled “Americans Increasingly Believe Violence is Justified if the Other Side Wins,” the essay was penned by three “senior fellows” at the Hoover Institution, New America, and the Hudson Institute, as well as a professor of “political communication” at Louisiana State University and a professor of government at the University of Maryland (that’s five authors, in case you lost count).

The major takeaway is presented in the graph that appears below: 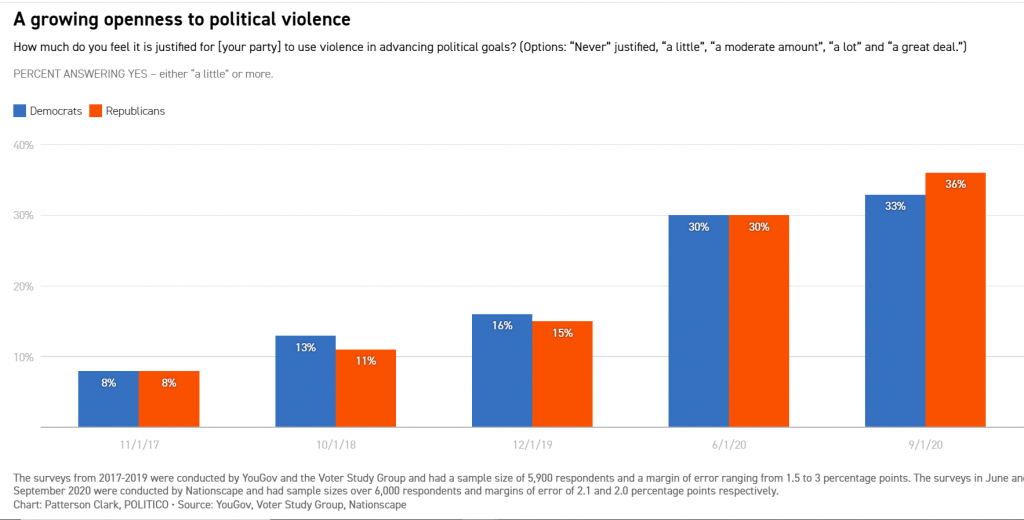 Way back in November of 2017 (my, how long ago that seems . . . ) a mere 8% of both Democrats and Republicans held that it is legitimate to use violence to advance their political goals. Actually, there’s nothing “mere” about it. It ought to surprise us that such a sizeable percentage of both parties could hold such a radical view. Also surprising is Republicans running neck and neck with Democrats. Contrary to how they are perceived by Leftists, conservatives are slow to embrace the idea of violence, or any sort of punitive measures against their opponents. Their Achilles heel, in fact, is commitment to “fair play.”

We must remember that when these numbers were compiled it had been a year since the 2016 election. A year of unhinged rhetoric by the Left, and repeated calls for Trump to be assassinated. Madonna spoke about her fantasies of blowing up the White House, and “comedian” Kathy Griffin held up an effigy of Trump’s severed head. Of course, those were the unserious, tongue-in-cheek threats. Countless other people made similar threats, quite openly, and seemed to be pretty serious about it. To my knowledge, none of them was charged with a crime.

This entry was posted in Uncategorized and tagged Political Violence, Secession. Bookmark the permalink.

One response to “Yes, We are Headed for Violent Civil War, by Jeff Costello”