The thing that many people don’t understand is the nature of viruses. They’re tiny, much smaller than the mesh on most masks. Because they are tiny, they can float along on air currents, traversing six-foot distances and floating around plastic shields. And they are trillions to the trillionth power of them; they will never be eradicated. From Tyler Durden at zerohedge:

You know those plastic Covid-19 barriers which sprung up everywhere to physically separate us for the past 18 months? It turns out they probably don’t help, and may make things worse.

In short, what may work for droplets does not work on an aerosolized virus. 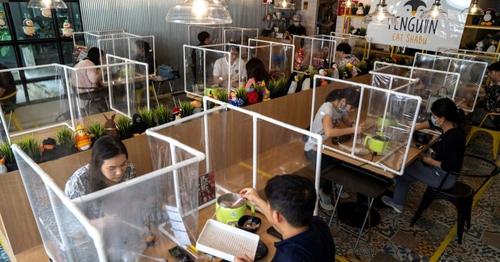 According to the New York Times, “scientists who study aerosols, air flow and ventilation say that much of the time, the barriers don’t help and probably give people a false sense of security. And sometimes the barriers can make things worse.”

In addition to stifling airflow and ventilation, the barriers can deflect germs to innocent bystanders such as another worker or customer.

Under normal conditions in stores, classrooms and offices, exhaled breath particles disperse, carried by air currents and, depending on the ventilation system, are replaced by fresh air roughly every 15 to 30 minutes. But erecting plastic barriers can change air flow in a room, disrupt normal ventilation and create “dead zones,” where viral aerosol particles can build up and become highly concentrated. -NYT

“If you have a forest of barriers in a classroom, it’s going to interfere with proper ventilation of that room,” said Virginia Tech professor of civil and environmental engineering, Linsey Marr. “Everybody’s aerosols are going to be trapped and stuck there and building up, and they will end up spreading beyond your own desk.”

This entry was posted in Medicine, Science and tagged Covid-19 barriers. Bookmark the permalink.