Russia is achieving its objectives in Ukraine and it is becoming increasingly difficult for the U.S. and Europe to pretend otherwise. From Moon of Alabama at moonofalabama.com:

This map of the situation in Ukraine on March 29 is provided by the French Ministry of Defense. 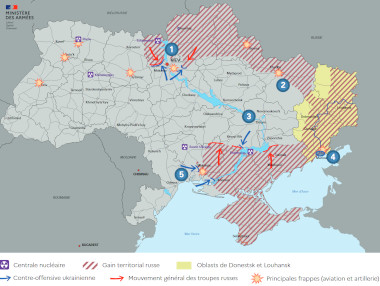 It is likely the most realistic and neutral one available. It comes with short notes about the numbered theaters.

Here are my own situation report notes:

The Russian military operation in Ukraine began with a rather small force of some 150.000+ men against a much larger (including reservist and territorial forces) Ukrainian force of some 400.000. The Russian force used maneuver warfare to fix the larger Ukrainian forces into place. It attacked on a large front and threatened major population concentrations, i.e. cities.

The Russian operations started with the destruction of the Ukrainian command and control network. Over the last four weeks the Ukrainian navy, its airforce, its radars and air defenses and a huge number of its armored vehicles were destroyed. Throughout the last week fuel depots all over the Ukraine were attacked and destroyed over night. Ukraine’s large ammunition depots are gone. Military production and repair facilities have likewise been destroyed. The Ukraine is no longer able to move large numbers of troops between the various fronts. Its army has lost its mobility.