“The Damage Could Be Huge”: Chinese Banks Tumble, Swept Up In Mortgage Nonpayment Scandal As Borrowers Revolt, by Tyler Durden

Here’s a brewing situation that could cause meltdowns of both the global financial situation and the Chinese government. From Tyler Durden at zerohedge.com

On Friday, shares of China’s banks extended their slide to a two-year low amid fears widespread mortgage non-payments would spark contagion within the banking sector (see “China On Verge Of Violent Debt Jubilee As “Disgruntled” Homebuyers Refuse To Pay Their Mortgages“) even after the local banking and insurance regulator said it will maintain continuity and stability of financing policies for the real estate sector. 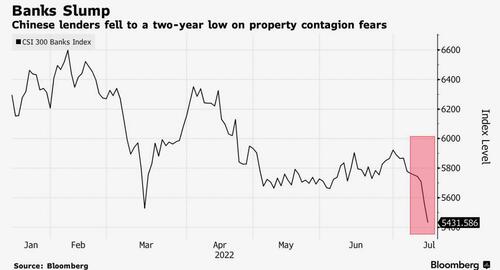 China Central Television said on its WeChat page that the regulator will guide financial institutions to participate in risk disposals based on market conditions, after researcher China Real Estate Information Corp. reported that home buyers had stopped mortgage payments on at least 100 projects in more than 50 cities as of Wednesday, spurring concerns that the quality of home loans is in rapid decline and could culminate in a 2007-like credit/housing bubble blow up.

Still, as Bloomberg Markets Live reporter Ye Xie writes, the grassroots movement of Chinese homebuyers boycotting mortgage payments isn’t exactly akin to the US subprime crisis of 2008.  That said, no matter what Beijing does to address the latest chapter in China’s housing crisis drama, banks are likely to share the burden.

This entry was posted in Banking, Debt and tagged Chinese mortgages. Bookmark the permalink.