The “Withholding” Tax You Pay by the Mile, by Eric Peters

Don’t think the thieves who rule us aren’t already working on taxes to replace the gasoline taxes electric car owners won’t be paying. From Eric Peters at ericpetersautos.com:

One of the biggest economic incentives to drive a hybrid (or a full-boogie electric car) is to not have to buy gas and – by dint of that – not have to pay the extortionate taxes applied to the purchase of gas. These total around 50 cents in taxes applied to every gallon of gas. Proportionately, gas taxes are just about the most regressive taxes after those applied to cigarettes, with the difference being no one has to smoke while almost everyone has to drive.

And even if you don’t drive, you still pay – because the cost others (truckers) pay for their gas (and diesel) plus taxes is folded into the cost of the things you buy, such as the food that is trucked from A to B. 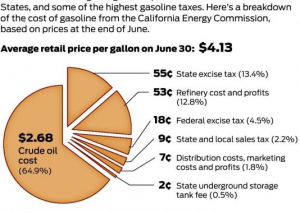 But government doesn’t like it when people evade paying, as by driving a car that uses very little or even no gas at all. Notwithstanding the government’s pushing of such cars.

The solution? Make those who bought them pay by the miles they drive rather than by the gallons they no longer buy.

Virginia is the latest state to initiate such a program – purely voluntary, of course . . . for the moment. The Mileage Choice Program, as it is styled, offers participants the option to “save money” – the carrot – by not having to pay the annual highway user fee (which is of course a tax)  that owners of hybrids and electric cars are otherwise required to pay to make up for the gas taxes they thought they would be able to avoid paying and thereby actually save money. Leaving aside the money they spent on the hybrid or EV to “save” it.

This entry was posted in Governments, Taxes and tagged Electric car mileage taxes. Bookmark the permalink.