Remember the vaccines! When the government starts you something is good for you, automatically reject it. If they tell you it’s so good they’re going to force it on you, you can be sure it’s inimical to you well-being. From Jeff Thomas at internationalman.com: 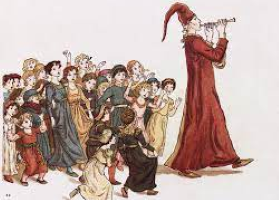 We all know the story: The Pied Piper has a magic flute that, when played by the piper, saves the people of Hamelin from a rat epidemic. When the townspeople fail to pay him for his services, he uses the flute to attract their children away.

In modern nomenclature, a pied piper is described as “a metaphor for a person who attracts a following through charisma or false promises.”

And that leads us to a discussion of Central Bank Digital Currencies, or CBDCs.

As recently as ten years ago, when writing on the possibility of digital currencies being introduced, the idea was so novel (or perhaps so abhorrent) that my predictions on the subject were considered to be fanciful. Yet, by 2016, announcements were being made by governments that digital currencies were “under consideration.”

And in the brief time since, the concept has caught on worldwide. Eleven countries have now launched them, and another eighty-seven are either researching them or developing them.

But why is it that bank depositors would accept the introduction of CBDCs?