Ukrainian Defense Lines And What Happens When They Are Breached, by Moon of Alabama

Ukraine just lost a big battle (not that you’ll hear about it in the mainstream media) and will have to move west. From Moon of Alabama at moonofalabama.org:

This constitutes the breach of Ukraine’s second defense line within the Donetzk and Lysichansk oblasts. I will discuss those lines with the maps below.

The first map shows the range of land taken by Russian forces by April 1 2022 (Kiev region not shown).

Russia had invaded with a small force of some 100,000 soldiers supported by some 50,000 soldiers of the Donetzk/Luhansk Republics. The opposing forces were 250,000 regular Ukrainian army troops which quickly grew to 450,000 and then 650,000 by mobilization of reserve forces plus the Territorial Defense Forces. During the first weeks the Russian forces had taken a huge amount of land that they barely had the numbers to hold.

At that point Russia was still hoping that the negotiations held at that time with Ukraine in Turkey would have a positive outcome. As a confidence measure it had already started to pull back from around Kiev. However, after phone calls from and a visit by the British prime minister Boris Johnson the Ukrainian government ended the negotiations by suddenly adding demands the Russia would never agree to. The troops from Kiev were pulled back anyway and moved to the east of Ukraine where they started an attack on the first defense line (yellow) of the Ukrainian forces. 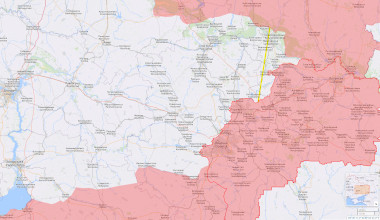 One response to “Ukrainian Defense Lines And What Happens When They Are Breached, by Moon of Alabama”