One thing the discredited propaganda staple “Vaccine side effects are rare” fails to address is the severity of the side effects. They can be pretty nasty, up to and including death. From Megan Redshaw at childrenshealthdefense.org:

In an exclusive interview with The Defender, Kristi Dobbs recounted how she’s spent nine months pleading with health agencies to research the neurological injuries she developed after Pfizer’s vaccine, and how she and others are trying to get the word out about the vaccine’s potential risks.

Kristi Dobbs, a 40-year-old dental hygienist from Missouri, said she can no longer work after being injured by Pfizer’s COVID vaccine. She has spent the past nine months pleading with U.S. health agencies to research the neurological injuries she and others are experiencing in hopes of finding a treatment.

But the story never ran because, according to the reporter, a “higher up” at Pfizer pressured the news agency to drop it.

Dobbs got her first and only dose of Pfizer’s vaccine on Jan. 18. She immediately experienced an adverse reaction on-site at the hospital clinic where her vaccine was administered.

“I had barely sat down in the monitoring area after the inoculation and felt an odd tingling sensation running down my left arm, where I had just received the jab,” Dobbs wrote. “I immediately had a pre-syncope episode, where I thought I was going to pass out, heart palpitations, increased pulse, increased respirations and a blood pressure spike that was within a stroke-worthy reading.”

Dobbs was monitored for an additional 45 minutes. When her blood pressure dropped to a manageable range, she was released.

The official numbers, undoubtedly understated, are out there and they tally up deaths and serious adverse reactions to the Covid vaccines. They get almost zero attention from the legacy media. From Michael Thau, Ph.D. at revolver.com:

Reader’s Note: This is Part Two of a three part series. If you haven’t done so, please read Part One here and Part Two here

Established in 1990, the Vaccine Adverse Event Reporting System (VAERS) is supposed to be “the nation’s frontline system for monitoring vaccine safety.”

In just five and a half months, the VAERS system has already processed more reports of Americans dying after taking a COVID-19 vaccine than it has for all the other 56 available vaccines combined over a 28 year timespan. 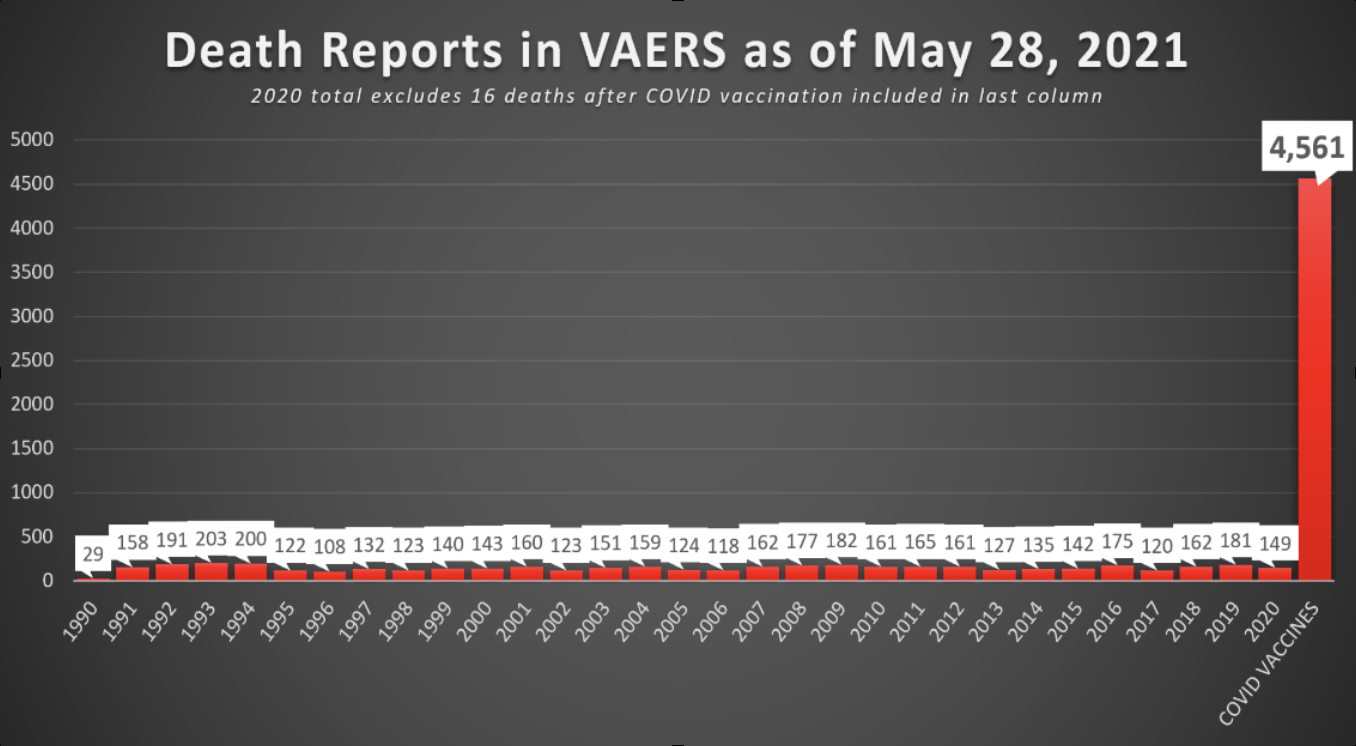 Reports of uncomfortably close calls with death are also flooding the system.