Jeff Bezos is a prime exponent of US interventionism. He’s got a lot a ways to make his views known, and a very receptive audience in Washington. From Eric Zuesse at consortiumnews.com:

It’s a billionaire’s world and the biggest of them all is in the thick of it, as Eric Zuesse explains.

Jeff Bezos is the owner of The Washington Post, which leads America’s news-media in their almost 100 percent support and promotion of neoconservatism, American imperialism and wars. This includes sanctions, coups, and military invasions against countries that America’s billionaires want to control but don’t yet control — such as Venezuela, Syria, Iran, Russia, Libya, and China.

These are aggressive wars against countries which have never aggressed against the United States. They are not, at all, defensive, but the exact opposite. It’s not necessarily endless war (even Hitler hadn’t planned that), but war until the entire planet has come under the control of the U.S. Government, a government that is itself controlled by America’s billionaires, the funders of neoconservatism and imperialism — in both major American political parties, think tanks, newspapers, TV networks, etcetera.

Bezos has been a crucial part of neoconservatism, ever since, at the June 6-9 2013 Bilderberg meeting, he arranged with Donald Graham, the Washington Post’s owner, to buy that newspaper, for $250 million. Bezos had already negotiated, in March of that same year, with the neoconservative CIA Director, John Brennan, for a  $600 million ten-year cloud computing contract that transformed Amazon corporation, from being a reliable money-loser, into a reliably profitable firm.

That caused Bezos’s net worth to soar even more (and at a sharper rate of rising) than it had been doing while it had been losing money. He became the most influential salesman not only for books, but for the CIA, and for such mega-corporations as Lockheed Martin. Imperialism has supercharged his wealth, but it didn’t alone cause it. Bezos might be the most ferociously gifted business-person on the planet.

Some of America’s billionaires don’t care about international conquest as much as he does, but all of them at least accept neoconservatism; none of them, for example, establishes and donates large sums to, anti-imperialistic organizations; none of America’s billionaires is determined to end the reign of neoconservatism, nor even to help the fight to end it, or at least to end its grip over the U.S. government. None. Not even a single one of them does. 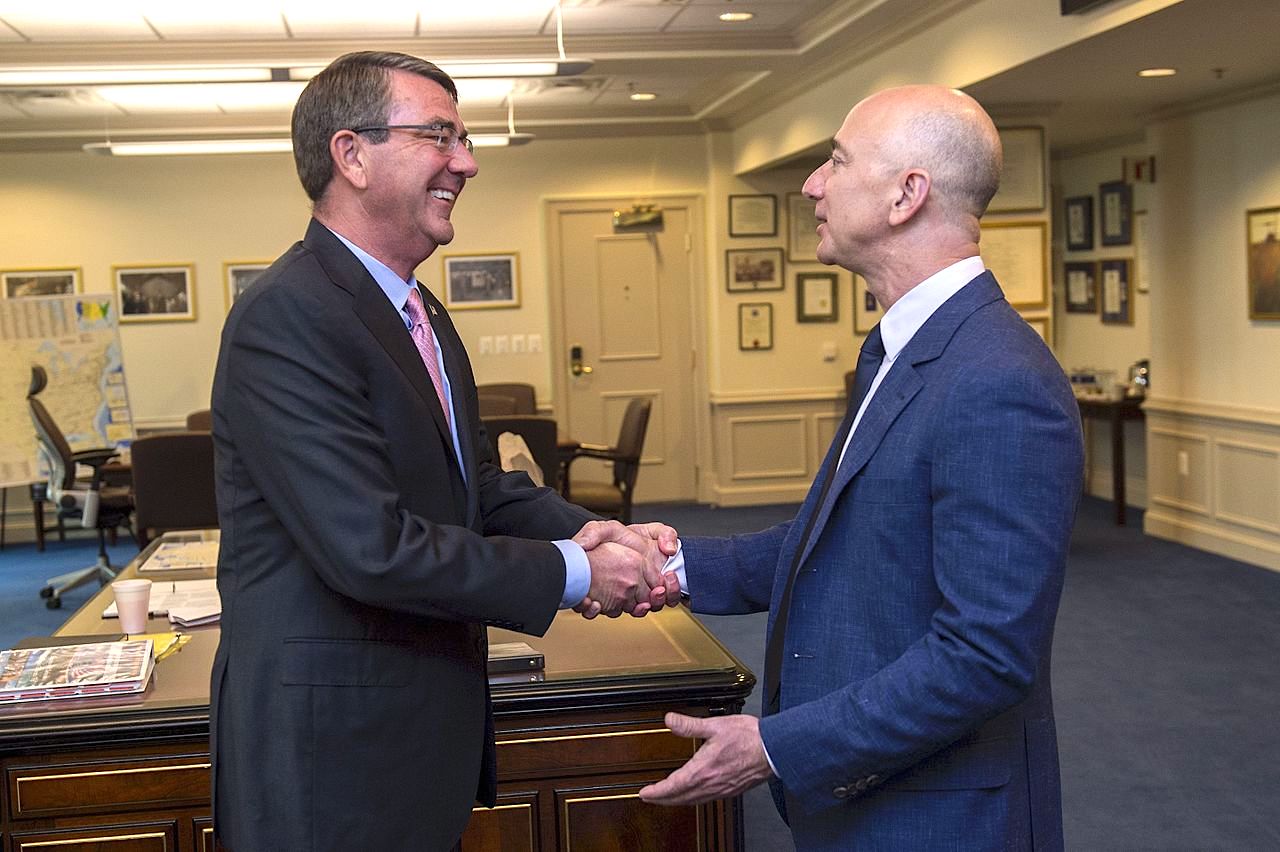 Plutocrat Bezos at the Pentagon with then Defense Secretary Ash Carter, May 2016. (Wikimedia Commons)

But many of them establish and donate large sums to neoconservative organizations, or run neocon organs such as The Washington Post.  That’s the way billionaires are, at least in the United States. All of them are imperialists. They sponsor it; they promote it and hire people who do, and demote or get rid of people who don’t. Expanding an empire is extremely profitable for its aristocrats, and always has been, even before the Roman Empire.

Bezos wants to privatize everything around the world that can become privatized, such as education, highways, health care, and pensions. The more that billionaires control those things, the less that everyone else does; and preventing control by the public helps to protect billionaires against democracy that would increase their taxes and government regulations that would reduce their profits by increasing their corporations’ expenses. So, billionaires control the government in order to increase their takings from the public.

With the help of the war promotion of  The Washington Post, Bezos is one of the world’s top personal sellers to the U.S. military-industrial complex. He controls and is the biggest investor in Amazon corporation, whose Web Services division supplies all cloud-computing services to the Pentagon, CIA and NSA. (He’s leading the charge in the most advanced facial recognition technology too.)

In April there was a headline, “CIA Considering Cloud Contract Worth ‘Tens of Billions’,” which contract could soar Bezos’s personal wealth even higher into the stratosphere, especially if he wins all of it (as he previously did).

He also globally dominates, and is constantly increasing his control over the promotion and sale of books and films, because his Amazon is the world’s largest retailer (and now also one of the largest publishers, producers and distributors.) That, too, can have a huge impact upon politics and government, indirectly, by promoting the most neocon works helping to shape intellectual discourse (and voters’ votes) in the country.

Bezos is crushing millions of retailers by his unmatched brilliance at controlling one market after another as Amazon or as an essential middleman for — and often even a controller of — Amazon’s retail competitors.

He is a strong believer in “the free market”, which he has mastered perhaps better than anyone. This means that Bezos supports the unencumbered ability of billionaires, by means of their money, to control and eventually absorb all who are less powerful than they.

Because he is so enormously gifted himself at amassing wealth, he has thus-far been able to rise to the global top, as being one of the world’s most powerful individuals. The wealthiest of all is King Salman— the owner of Saudi Arabia, whose Aramco (the world’s largest oil company) is, alone, worth over a trillion dollars. (Forbes and Bloomberg exclude monarchs from their wealth-rankings.) 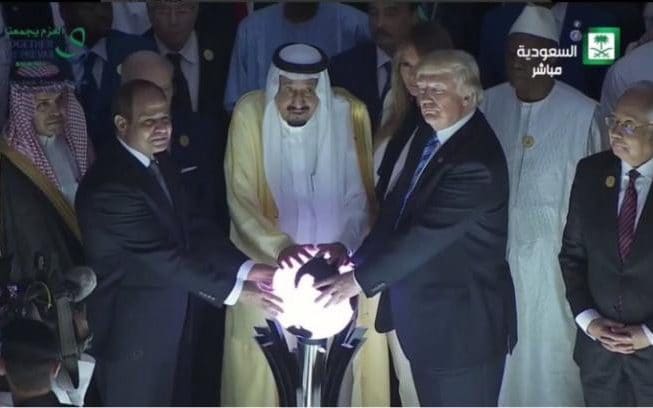 In fact, Bloomberg is even so fraudulent about it as to have headlined on Aug. 10, “The 25 wealthiest dynasties on the planet control $1.4 trillion” and violated their tradition by including on their list one monarch, King Salman, whom they ranked at #4 as owning only $100 million, a ludicrously low ‘estimate’, which brazenly excluded not just Aramco but any of the net worth of Saudi Arabia.

Bloomberg didn’t even try to justify their wacky methodology, but merely presumed the gullibility of their readers for its acceptance. That King, therefore, is at least seven times as rich as Bezos is. He might possibly be as powerful as Bezos is. The supreme heir is lots wealthier even than the supreme self-made billionaire or “entrepreneur” is.

Certainly, both men are among the giants who bestride the world in our era. And both men are libertarians — champions of the belief that property rights (of which, billionaires have so much) are the basis of all rights, and so they believe that the wealthiest people possess the most rights of all, and that the poorest people have the least, and that all persons whose net worths are negative (having more debts than assets) possess no rights except what richer people might donate to or otherwise grant to them, out of kindness or otherwise (such as familial connections).

This — privatization of everything — is what libertarianism is: a person’s worth is his or her “net worth” — nothing else. That belief is pure libertarianism. It’s a belief that many if not most billionaires hold. Billionaires are imperialistic because they seek to maximize the freedom of the super-rich, regardless of whether this means increasing their takings from, or ultimately impoverishing, everyone who isn’t super-rich. They have a coherent ideology. It’s based on wealth. The public instead believes in myths that billionaires enable to be promulgated.

Like any billionaire, Bezos hires and retains employees and other agents who do what he/she wants them to do. This is their direct power. But billionaires also possess enormous indirect power by means of their interdependencies upon one-another, as each large corporation is contractually involved with other corporations, especially with large ones such as they; and, so, whatever power any particular billionaire possesses is actually a shared power, along with the others. (An example was the deal Bezos made with Graham.)

Collectively, they network together, even with ones they might never even have met personally, but only through their representatives, and even with their own major economic competitors. This is collective power which billionaires possess in addition to their individual power as hirers of employees and other agents.

Whereas Winston Smith, in the prophetic allegorical novel 1984, asked his superior and torturer O’Brien, “Does Big Brother exist?”

“‘Of course he exists. The Party exists. Big Brother is the embodiment of the Party.’

‘Does he exist in the same way as I exist?’ 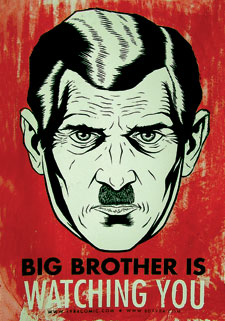 This collective power is embodied by Bezos as well as any billionaire does.  A few of the others may embody it too, such as Bill Gates, Warren Buffett, Larry Ellison, Mark Zuckerberg, Charles Koch, Sergey Brin, Michael Bloomberg, George Soros,  and Jack Dorsey.  They compete against each other, and therefore have different priorities for the U.S. government; but, all of them agree much more than they disagree in regards to what the Government “should” do (especially that the U.S. military should be expanded — at taxpayer’s expense, of course, not their own).

Basically, Big Brother, in the real world is remarkably coherent and unified — far more so than the public is — and this is one of the reasons why they control Government, bypassing the public.

Here is how all of this plays out, in terms of what Bezos’s agents have been doing:

His Amazon pays low to no federal taxes because the Federal Government has written the tax-laws to encourage companies to do the types of things that Bezos has always wanted Amazon to do.

The U.S. government consequently encourages mega-corporations through taxes and regulations to crush small firms by making it harder for them to grow. That somewhat locks-in the existing aristocracy to be less self-made (as Bezos himself was, but his children won’t be).

Elected politicians overwhelmingly support this because most of their campaign funds were donated by super-rich individuals and their employees and other agents. It’s a self-reinforcing system. Super-wealth controls the government, which (along with the super-wealthy and their corporations) controls the public, which reduces economic opportunity for them. The end-result is institutionally reinforced extreme wealth-inequality, becoming more extreme all the time.

The billionaires are the real Big Brothers. And Bezos is the biggest of them all.