Money Minus Value, No Limit, by Jim Kunstler

It looks like the US is going to have to live with the consequences of its myriad stupidities. From Jim Kunstler at kunstler.com:

You understand, there will be no meaningful resuscitation of the dear, departed, so-called greatest boom in history. Ponzi schemes don’t “bounce back,” they collapse for the simple reason that the pieces holding them up were not really there. Such are the unanticipated consequences of a media over-saturated culture that we were so easily deceived by appearances.

The emotions entrained by this implacable disaster have barely expressed themselves in the social arena. The public is still too shell-shocked by the prospect of losing everything ­– jobs, incomes, status, chattels, a future – to commence what the shrinks call “acting out.” Anyway, half the country is still acting out over the election of Mr. Trump three years ago.

But, for the moment, an interesting debate rages internationally as to whether the Covid-19 virus was some kind of engineered event designed to bring about various political outcomes. One thread declares that the Democratic Party, its media handmaidens, and a helpful Chinese leadership used the virus to blow up the US economy and finally, after several botched attempts, get rid of the vexing Mr. Trump. It’s a tidy story, but I don’t buy it, for the simple reason that the entire global economy has blown up, including China’s, so you can file that meme in the Wile E. Coyote folder.

END_OF_DOCUMENT_TOKEN_TO_BE_REPLACED

No, Mr. Boomer We’ve Run Out of God Pills, by Tom Luongo

We’ve run out of road down which we can continue to kick the can. From Tom Luongo at tomluongo.me:

END_OF_DOCUMENT_TOKEN_TO_BE_REPLACED

All Crises Are Local, by Jeff Deist

Perhaps a state like South Dakota, with few people and a lot of space, doesn’t require the same coronavirus measures as New York City, with millions of people and limited space. From Jeff Deist at mises.org:

A seemingly innocuous statement, made last Wednesday by Governor Kristi Noem in response to calls for her to issue a coronavirus shutdown across a state with the motto “Under God the People Rule.”

South Dakota, after all, is one of the least densely populated states in the vast American West. Surely local circumstances should inform local responses to a communicable disease?

Not so, according to Noem’s scolds at Change.org. They want the same “theory” applied in Brooklyn and in prairie towns with eleven residents per square mile.

To her tremendous credit, Governor Noem has held firm against the tide of state officials ordering lockdowns and shelter-in-place directives. As of today five US states do not have statewide shutdown orders in place, and some sheriffs too have stood bravely against impositions of soft martial law.

END_OF_DOCUMENT_TOKEN_TO_BE_REPLACED

How Long Will The Lockdown Last? by Tucker Carlson

‘We Have No Money’: Coronavirus Slams State Taxes, by Sophie Quinton

The coronavirus outbreak has been going on for almost six months now, but in the US, the economic effects of shutting down businesses and confining people to their homes is just starting to bite. From Sophie Quinton at pewtrusts.org:

DENVER — Economists who advise the Colorado legislature told lawmakers in mid-March to expect a roughly $800 million revenue decline for the next fiscal year as people travel and dine out less during the coronavirus pandemic.

That estimate already looks far too optimistic. “The forecast that we released in March — we weren’t imagining the world that we’re living in right now,” said Kate Watkins, chief economist for the Legislative Council Staff, the nonpartisan research arm of the Colorado General Assembly.

Governors nationwide have ordered businesses to close and people to stay home in order to slow the spread of the novel coronavirus. But the public health measures have created an economic crisis that will, in turn, hit state and city budgets.

Now policymakers are scrambling to figure out how much spending power they’re losing at a moment when they need money to fight the pandemic and help laid-off workers and struggling businesses.

Food banks, just like the unemployment offices, are seeing skyrocketing numbers. From Tyler Durden at zerohedge.com:

America is crashing into a depression. In just two weeks, 10 million people have claimed unemployment benefits. This has put unprecedented stress on food bank networks across the country, a new investigation via The Guardian shows.

The US labor market is in free fall – the increasing lockdowns across major US metropolitan areas have forced millions of people out of work and into a hunger crisis.

The Guardian shows demand for food aid in some regions of the country has surged eightfold in recent weeks as RealInvestmentAdvice.com’s Lance Roberts warns the unemployment rates in the US could spike to levels not seen since the “Great Depression,” or about 15-20% in the second quarter. 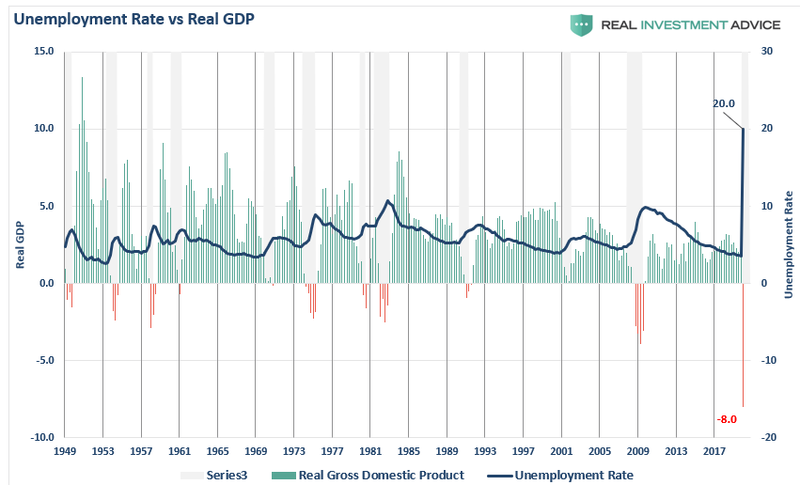 The coronavirus lockdowns and and shut downs of businesses may impart two of communism’s chief blessing: weight loss and less consumerism. From Allan Stevo at lewrockwell.com:

An often overlooked detail about communism is how much more slender the people are.

The Cuban government to this day offers their people a weight loss plan.

It’s a mandatory plan that comes from preventing a functioning marketplace from working. The weight loss plan got more restrictive for a few years after the Soviet Union crumbled and stopped propping up Cuba. People went hungry. It got worse again after even petroleum-rich benefactor Venezuela fell apart at the hands of leaders with communist ideas.

Venezuela too has a weight loss plan that has resulted from the once prosperous country’s own experiment with communism. Venezuelans lost 19 lbs in 2016.

Then there is the horrific Holodomor, in which proud farmers in the USSR said they wouldn’t be subjected to the silly communist ideas from the flakey ne’er-do-wells  who led the putsch a decade earlier. Entire villages were declared excluded from the economy of the USSR and possession of a single grain of wheat could be punishable by death. Far worse than Cuba or Venezuela, those Ukrainian farmers living under communism grew so slender that they just disappeared into the ground. How many millions of men, women, and children died in the Holodomor is a subject for debate by historians. This took place in the breadbasket of Europe.