Here is the real reason why the US is still in Afghanistan, 18 years after 9/11. From John Brennan at off-guardian.org: 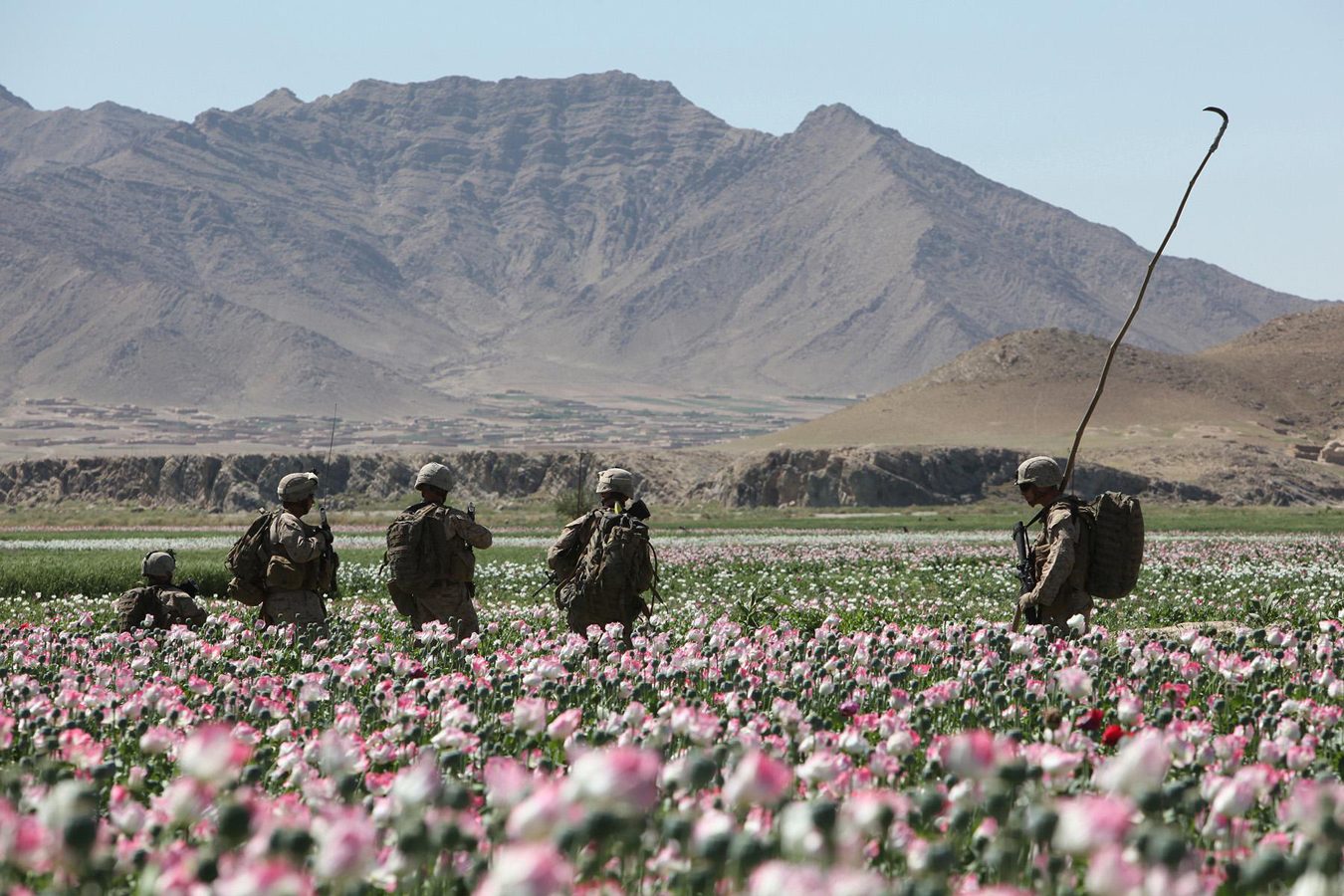 In Afghanistan, “the world’s first narco-state” operates under US Marines very nose

All the latest news on Afghanistan is about Donald Trump’s peace agreement with Taliban and the possible end of America’s longest war. However, it is happening against a background of another acute problem and this one seems even more seriously than a path home for 14,000 American troops before the 2020 United States presidential election. The problem is Afghan heroin.

The Guardian has named Afghanistan “the world’s first true narco-state”. If one accepts this thesis, then the capital of the country is not Kabul, the city being suffered from bloody terrorists’ attacks, but the southern Province Helmand, where the river of the same name runs.

Helmand, one of the few regions in Afghanistan appropriate for agriculture, has become the world’s biggest center for opium production. According to the data of the United Nations for 2018, 69% Afghan opium crop is cultivated in this province.

The USA was always seeking for control over Helmand. Until 2010, this province was the area of responsibility of the British Contingent. The British Army set up a military Camp Bastion, located northwest of the administrative center of Helmand Province. It was the largest British overseas military base built since the Second World War. The airfield at Camp Bastion was equipped to handle all types of aircrafts. After 2010, US aircrafts alongside with land troops were stationed there under the pretext of war with the Taliban.

In 2014 the base was handed over to Afghan National Army and renamed Camp Shorab. Nevertheless, American troops got there 3 years later. Since April 2017 300 US Marines have been stationed on this base. The official mission of this contingent is the training of Afghan security forces. US Marines train local military and police to fight with the Taliban and drugs.

But the facts show otherwise. The United States isn’t interested in combating Afghan opium industry, but rather takes control over heroin trade routes out of Afghanistan. In this scheme Camp Shorab is some sort of the hub between Afghan drug mafia and dealers in Europe and the Middle East.

In 2016 Obaidullah Barakzai, a member of the National Assembly of Afghanistan, alleged that military units of Afghan National Army conducted bloody battles with the Taliban in Helmand only in order to allow western powers to take control over deposits of uranium and drugs trafficking.

Commenting on foreign military involvement in drug trafficking, he said:

It’s impossible for a few local drug smugglers to transfer opium in thousands of kilos. This is the work of the Americans and British. They transport it by air from Camp Shorab.”

Barakzai had been the target of numerous attacks from the Taliban. On 23 March 2019 he was shot in Kandahar province. He also had experienced the death of his son at the hand of the Taliban.

Local citizen confirm the words of the late politician. They say that poppy fields are at arm’s length from the military base, where US Marines are located. Afghans, speaking only on condition of anonymity, confirm that there is a close connection between owners of heroin laboratories and American troops who buy drugs in large quantities.

In this context, bombing campaign code-named “Iron Tempest”, conducted by the US Air Force from November 2017 to February 2019, has raised a number of questions. The aim was to take out drug laboratories in Afghanistan by airstrikes. But, according to the research of Dr. David Mansfield (London School of Economics), the attacked laboratories had not been active at the time of the airstrike and the heroin produced there was transferred to an unknown location.

Close relations between Afghan drug mafia and US military give Washington an opportunity to make billions, which remain unaccounted. This money could be spent on specific tasks: back up terrorist organizations or overthrow unwanted regimes in the Middle East.

This is not merely a claim. The United States has already used such a scenario in the latter half of 1980th years. It caused a political scandal known as “The Iran-Contra affair”.

Certain administration officials of the Reagan Administration secretly facilitated the sale of arms to Iran, which was the subject of an arms embargo. Funds from the arms deal were used to support armed conflict in Nicaragua.

It’s clear that Washington is interested in maintaining Afghanistan as narco-state despite the rising number of drug-addicted servicemen stationed in this country with training mission. It means that there is no chance to solve Afghanistan’s opium problem as long as US military keep staying there.

This entry was posted in Crime, Cronyism, Governments and tagged Afghanistan, Drug trafficking. Bookmark the permalink.