Europe’s full-blown Stockholm Syndrome in face of US bullying, by Finian Cunningham

Europe needs to rediscover its gumption. From Finian Cunningham at rt.com: 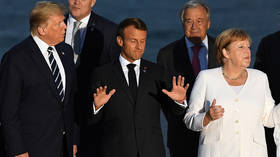 G7 summit in Biarritz, France, August 25, 2019© Andrew Parsons/Pool via Reuters
The psychological condition known as Stockholm Syndrome, in which hostages irrationally sympathize with their captors, could well be applied to European leaders when it comes to US bullying.

The US has always been the dominant –and domineering– party in the transatlantic relationship. But past administrations in Washington have been careful to indulge European states as “partners” in a seemingly mutual alliance.

Under President Donald Trump, the Europeans are pushed around and hectored in a way that shows their true status as mere vassals to Washington.

Take the Nord Stream 2 project. The 1,220-kilometer-long undersea pipeline, which will significantly increase delivery of gas to Europe, is due to be completed by year’s end. The new supply stands to benefit the European Union’s economy, in particular Germany’s, by providing cheaper energy fuel to drive businesses and heat homes.

Yet last week, US Senator Ted Cruz threatened that his country “has the ability to halt” the entire project being completed. Cruz is on the Senate Foreign Relations Committee which in July passed a bill that will impose sanctions on companies involved in the construction of the pipeline. Germany, Austria, France and Britain are part of the building consortium, along with Russia’s Gazprom.

This entry was posted in Business, Foreign Policy, Geopolitics, Governments and tagged Europe, US domination. Bookmark the permalink.