Meet the black, transgender Cinderella’s godmother you’ve all been waiting for (or so the woke media tells us), from RT

Hollywood is putting ideology before entertainment. We’ll see how that works out at the box office. From rt.com: 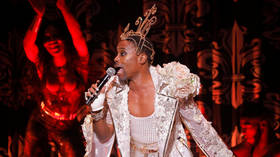 Is there any phrase more guaranteed to ruin a sweet childhood memory than “a modern re-imagining of…”? Especially when ‘modern’ means ‘sanitized’ and ‘injected with pointless social-justice twaddle.’

Enter the black, transgender fairy godmother. According to Hollywood Reporter, Emmy-award winning actor Billy Porter will play the role in Sony Pictures’ upcoming remake of the 1950 Disney classic, alongside Cuban-American actress Camila Cabello as the titular princess. Billy Porter, for the uninitiated, is a gay man.

This entry was posted in Entertainment, Movies and tagged Political Correctness. Bookmark the permalink.

One response to “Meet the black, transgender Cinderella’s godmother you’ve all been waiting for (or so the woke media tells us), from RT”