Nissan’s Nosedive … and Possibly Why, by Eric Peters

Nissan is losing a lot of money selling electric cars. From Eric Peters at ericpetersautos.com:

Net income fell by more than half to 59 billion yen ($546.8 million) in the July-September period. According to the Reuters piece – and a public announcement by Nissan – revenue decreased 6.6 percent to 2.63 trillion yen ($24.4 billion) over the past three months and global retail volume declined 7.5 percent to 1.27 million vehicles. 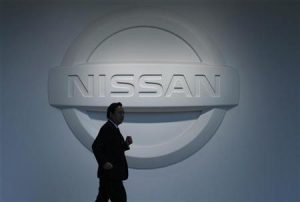 Part of the problem is heavy discounting, which gives any brand that does it the aura of a K-Mart Blue Light Special. Nissan also has several very old models in its new vehicle lineup, including the 370Z sports car and the Frontier pickup. The full-size Titan (and Titan XD) also haven’t been doing well, despite a market that loves big trucks.

But there could be a subtext here as well – one that Reuters and the rest of the captive press aren’t reporting.

Nissan is the main “seller” of electric cars so far –  other than Tesla. Its Leaf has been on the market since 2011, almost ten years running – and hemorrhaging money with each “sale.”

The Leaf has the worst depreciation record of any car – electric or not – since the Edsel. It is common for these things to be worth less than half their original/new-car MSRP of almost $30k after as little as four years on the road – which happens not so much because the car itself is a clunker but rather because its battery is so expensive. 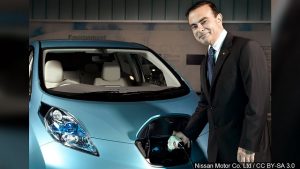 The most unreported story of our times is the inevitable degradation of EV battery performance over a relatively short time – the result of discharging and charging the battery.

It works the same for a lithium-ion EV battery as it does for a AA rechargeable flashlight battery. But EV lithium ion batteries cost thousands of dollars to replace – the equivalent, in IC car terms, of putting a new engine in the car after as little as five or six years.

Not because the battery is dead, even – but because it is depleted.

Discharge/recharge cycling reduces the battery’s capacity over time; it accepts less charge and it discharges faster.

In an EV, this translates as less range. 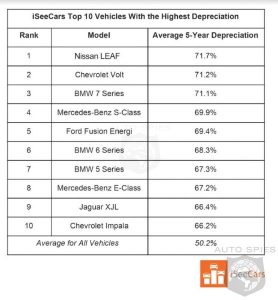 And when your EV starts out with only 150 miles of range (the best-case range of the base-price, $30k Leaf) and you lose say 40 percent of that because of depleted battery capacity, you’re left with a car that now has a range of maybe 80 or 90 miles, best case.

And it will get steadily worse, like a slipping clutch – only one that needs to be replaced every 30,000 miles (in IC car terms) rather than once every 150,000 miles – and for five times the cost of a clutch job.

That 40 percent reduction in range amounts to an equivalent amount of time watching the clock while you wait for your increasingly distance-crippled EV to recover whatever charge it can still hold. Given that an 80 or 90 mile best case range is marginal even for a daily there-and-back commute of 60 miles because it’s on the ragged edge of the car’s maximum and therefore its driver operates under the constant threat of not getting back from there  . . . well, the whole prospect is very unappealing.

This can be fixed, of course, by spending several thousand dollars for a new battery – but that’s a hard sell hard sell to most people shopping used cars – given they can buy a whole used car that doesn’t need a new engine and can take them 400 miles for the price of replacing the Leaf’s battery.

Which is why the Leaf – which is why electric cars, generally – depreciate faster than the Titanic took on water.

So this bidness with Nissan maybe going out of bidness could be a harbinger of Things to Come – and coming soon. Because it will be very soon that other car companies trot out their Leafs. 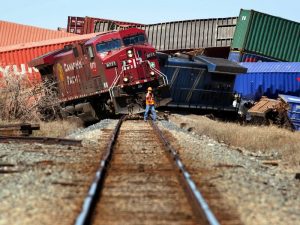 All of them beset by the same chromosomal defects that have rendered the Leaf (and Teslas) the Down Syndrome cars of our time. But we’re all supposed to pretend that these very special cars are – somehow – going to function in the real world and do just fine.

Which is as silly – and cruel, really – as expecting a person afflicted with Down Syndrome to succeed as a novelist or even a bank teller.

It’s going to be a fun ride!