The Terrifying Rise of the Zombie State Narrative, by Craig Murray

If governments never admit they lie or that they were wrong, it means they never lie or are wrong. From Craig Murray at craigmurray.org.uk:

The ruling Establishment has learnt a profound lesson from the debacle over Iraqi Weapons of Mass Destruction. The lesson they have learnt is not that it is wrong to attack and destroy an entire country on the basis of lies. They have not learnt that lesson despite the fact the western powers are now busily attacking the Iraqi Shia majority government they themselves installed, for the crime of being a Shia majority government.

The Establishment had to do a certain amount of collective self-flagellation over the non-existent Iraqi weapons of mass destruction, over which they precipitated the death and maiming of millions of people. Only a very few outliers, like the strange Melanie Phillips, still claimed the WMD really did exist, and her motive was so obviously that she supported any excuse to kill Muslims that nobody paid any attention. Her permanent pass to appear on the BBC was upgraded. But by and large everyone accepted the Iraqi WMD had been a fiction. The mainstream media Blair/Bush acolytes like Cohen, Kamm and Aaronovitch switched to arguing that even if WMD did not exist, Iraq was in any case better off for having so many people killed and its infrastructure destroyed.

These situations are now avoided by the realisation of the security services that in future they just have to brazen it out. The simple truth of the matter – and it is a truth – is this. If the Iraq WMD situation occurred today, and the security services decided to brazen it out and claim that WMD had indeed been found, there is not a mainstream media outlet that would contradict them.

The security services outlet Bellingcat would publish some photos of big missiles planted in the sand. The Washington Post, Guardian, New York Times, BBC and CNN would republish and amplify these pictures and copy and paste the official statements from government spokesmen. Robert Fisk would get to the scene and interview a few eye witnesses who saw the missiles being planted, and he would be derided as a senile old has-been. Seymour Hersh and Peter Hitchens would interview whistleblowers and be shunned by their colleagues and left off the airwaves. Bloggers like myself would be derided as mad conspiracy theorists or paid Russian agents if we cast any doubt on the Bellingcat “evidence”. Wikipedia would ruthlessly expunge any alternative narrative as being from unreliable sources. The Integrity Initiative, 77th Brigade, GCHQ and their US equivalents would be pumping out the “Iraqi WMD found” narrative all over social media. Mad Ben Nimmo of the Atlantic Council would be banning dissenting accounts all over the place in his role as Facebook Witchfinder-General.

Does anybody seriously wish to dispute this is how the absence of Iraqi WMD would be handled today, 16 years on?

If you do wish to doubt this could happen, look at the obviously fake narrative of the Syrian government chemical weapons attacks on Douma. The pictures published on Bellingcat of improvised chlorine gas missiles were always obviously fake. Remember this missile was supposed to have smashed through ten inches of solid, steel rebar reinforced concrete. 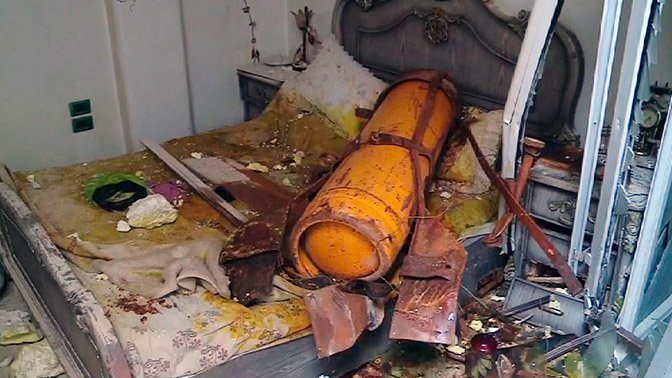 As I reported back in May last year, that the expert engineers sent to investigate by the Organisation for the Prohibition of Chemical Weapons (OPCW) did not buy into this is hardly surprising.

That their findings were deliberately omitted from the OPCW report is very worrying indeed. What became still more worrying was the undeniable evidence that started to emerge from whistleblowers in the OPCW that the toxicology experts had unanimously agreed that those killed had not died from chlorine gas attack. The minutes of the OPCW toxicology meeting really do need to be read in full.

I really do urge you to click on the above link and read the entire minute. In particular, it is impossible to read that minute and not understand that the toxicology experts believed that the corpses had been brought and placed in position.

“The experts were also of the opinion that the victims were highly unlikely to have gathered in piles at the centre of the respective apartments, at such a short distance from an escape from any toxic chlorine gas to much cleaner air”.

So the toxicology experts plainly believed the corpse piles had been staged, and the engineering experts plainly believed the cylinder bombs had been staged. Yet, against the direct evidence of its own experts, the OPCW published a report managing to convey the opposite impression – or at least capable of being portrayed by the media as giving the opposite impression.

How then did the OPCW come to do this? Rather unusually for an international organisation, the OPCW Secretariat is firmly captured by the Western states, largely because it covers an area of activity which is not of enormous interest to the political elites of developing world states, and many positions require a high level of technical qualification. It was also undergoing a change of Director General at the time of the Douma investigation, with the firmly Francoist Spanish diplomat Fernando Arias taking over as Director General and the French diplomat Sebastian Braha effectively running the operation as the Director-General’s chef de cabinet, working in close conjunction with the US security services. Braha simply ordered the excision of the expert opinions on engineering and toxicology, and his high-handedness worked, at least until whistleblowers started to reveal the truth about Braha as a slimy, corrupt, lying war hawk. 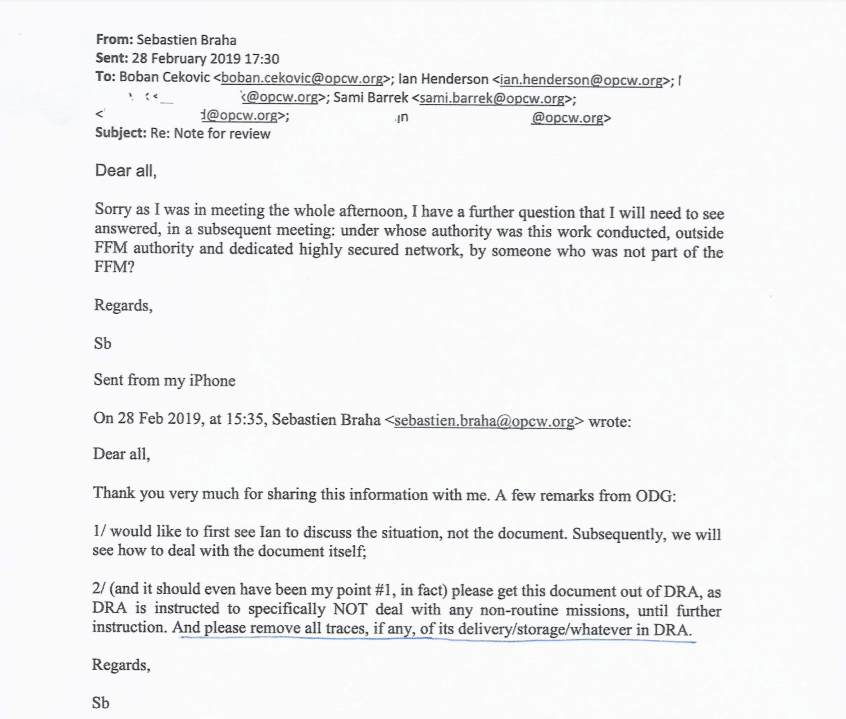 FFM here stands for Fact Finding Mission and ODG for Office of the Director General. After a great deal of personal experience dealing with French diplomats, I would say that the obnoxious arrogance revealed in Braha’s instructions here is precisely what you would expect. French diplomats as a class are a remarkably horrible and entitled bunch. Braha has no compunction about simply throwing around the weight of the Office of the Director General and attempting to browbeat Henderson.

We see now how the OPCW managed to produce a report which was the opposite of the truth. Ian Henderson, the OPCW engineer who had visited the site and concluded that the “cylinder bombs” were fakes, had suddenly become excluded from the “fact finding mission” when it had been whittled down to a “core group” – excluding any engineers (and presumably toxicologists) who would seek to insert inconvenient facts into the report.

France of course participated, alongside the US and UK, in missile strikes against Syrian government positions in response to the non-existent chlorine gas attacks on Douma. I was amongst those who had argued from day one that the western Douma narrative was inherently improbable. The Douma enclave held by extreme jihadist, western and Saudi backed forces allied to ISIL, was about to fall anyway. The Syrian government had no possible military advantage to gain by attacking it with two small improvised chemical weapons, and a great deal to lose in terms of provoking international retaliation.

That the consequences of the fake Douma incident were much less far-reaching than they might have been, is entirely due (and I am sorry if you dislike this but it is true) to the good sense of Donald Trump. Trump is inclined to isolationism and the fake “Russiagate” narrative promoted by senior echelons of his security services had led him to be heavily sceptical of them. He therefore refused, against the united persuasion of the hawks, to respond to the Douma “attack” by more than quick and limited missile strikes. I have no doubt that the object of the false flag was to push the US into a full regime change operation, by falsifying a demonstration that a declared red line on chemical weapon use had been crossed.

There is no doubt that Douma was a false flag. The documentary and whistleblower evidence from the OPCW is overwhelming and irrefutable. In addition to the two whistleblowers reported extensively by Wikileaks and the Courage Foundation, the redoubtable Peter Hitchens has his own whistleblowers inside OPCW who may well be different persons. It is also great entertainment as well as enlightening to read Hitchens’ takedown of Bellingcat on the issue.

But there are much deeper questions about the Douma false flag. Did the jihadists themselves kill the “chlorine victims” for display or were these just bodies from the general fighting? The White Helmets were co-located with the jihadist headquarters in Douma, and involved in producing and spreading the fake evidence. How far were the UK and US governments, instrumental in preparing the false flag? That western governments, including through the White Helmets and their men at the OPCW, were plainly seeking to propagate this false flag, to massively publicise and to and make war capital out of it, is beyond dispute. But were they involved in the actual creation of the fake scene? Did MI6 or the CIA initiate this false flag through the White Helmets or the Saudi backed jihadists? That is unproven but seems to me very probable. It is also worth noting the coincidence in time of the revelation of the proof of the Douma false flag and the death of James Le Mesurier.

Now let me return to where I started. None of the New York Times, the Washington Post, the BBC, the Guardian nor CNN – all of which reported the Douma chemical attack very extensively as a real Syrian government atrocity, and used it to editorialise for western military intervention in Syria – none of them has admitted they were wrong. None has issued any substantive retraction or correction. None has reported in detail and without bias on the overwhelming evidence of foul play within the OPCW.

Those sources who do publish the truth – including the few outliers in mainstream media such as Peter Hitchens and Robert Fisk – continue to be further marginalised, attacked as at best eccentric and at worse Russian agents. Others like Wikileaks and myself are pariahs excluded from any mainstream exposure. The official UK, US, French and Spanish government line, and the line of the billionaire and state owned media, continues to be that Douma was a Syrian government chemical weapons attack on civilians. They intend, aided and abetted by their vast online propaganda operations, to brazen out the lie.

What we are seeing is the terrifying rise of the zombie state narrative in Western culture. It does not matter how definitively we can prove that something is a lie, the full spectrum dominance of the Establishment in media resources is such that the lie is impossible to kill off, and the state manages to implant that lie as the truth in the minds of a sufficient majority of the populace to ride roughshod over objective truth with great success. It follows in the state narrative that anybody who challenges the state’s version of truth is themselves dishonest or mad, and the state manages also to implant that notion into a sufficient majority of the populace.

These are truly chilling times.

In the next instalment I shall consider how the Establishment is brazening out similar lies on the Russophobe agenda, and sticking to factually debunked narratives on the DNC and Podesta emails, on the Steele Dossier and on the Skripals.