The official US-Great Britain narrative of Syria makes so little sense it could only have been written by intelligence agents. From Moon of Alabama at moonofalabma.org:

Russia has called Turkey’s bluff of a wide ranging attack on Syrian government forces. The Turkish president Recep Tayyip Erdogan will now have to find a way out of the Idleb trap he set himself in. His excellent Syria adventure is coming to an end.

Meanwhile we learn that the British military intelligence ran another large dis-information campaign that brought ‘Syrian voices’ into the ‘western’ press.

Erdogan continues with his wild rhetoric over Syria.

#ERDOGAN: “#Turkey cannot be confined within the 780,000 km2 border. #Misrata, #Aleppo, #Homs & #Hasaka are outside our actual borders, but they are within our emotional & physical limits, we will confront those who limit our history to only 90yrs.”

The Turkish talks with Russia have not gone well. Russia had proposed the following points:

Some ten of Turkey’s observation points are currently surrounded by the Syrian army. If Turkey starts to escalate they will be in a dire situation. 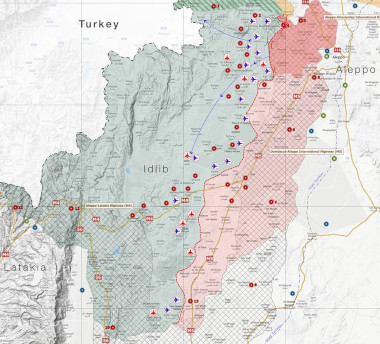 President Recep Tayyip Erdoğan said on Feb. 19 that talks with Russia on the northwestern Syrian region of Idlib were far from meeting Turkey’s demands and warned that a military operation there was a “matter of time”.”As with all [previous] operations, we say ‘we could suddenly come one night.’ In other words, an Idlib operation is a matter of time,” Erdoğan said. He was referring to the previous three Turkish operations to northern Syria since 2016.

“We are entering the last days for the [Syrian] regime to stop its hostility in Idlib. We are making our final warnings,” he added. “Turkey has made all preparations to carry out its own operation plans in Idlib.”

The Kremlin spokesman added that “if it is an operation against Syria’s legitimate authorities and armed forces, it will definitely be the worst scenario.”Russia will continue contacts with Turkey in order to prevent the situation in Idlib from escalating further, according to Peskov.

“We are determined to continue to use our working contacts with our Turkish counterparts to prevent the situation in Idlib from escalating further,” he said.

Two Russian Tupolev Tu-22M3 strategic bombers have performed a scheduled flight over the neutral waters of the Black Sea, Russia’s Defense Ministry said in a statement on Wednesday.”During the flight, the crews covered a distance of about 4,500 km and stayed in the air for more than five hours,” the statement runs.

Fighter jets of Russia’s Southern Military District escorted the bombers during the flight.

The Tu-22M3 can fire long range cruise missiles. The Turkish military will understand that warning.

The Russians are also prodding Erdogan with reports about U.S. weapon deliveries to PKK-Kurds in east Syria:

“The US command in the region is intensively saturating the territory east of the Euphrates river with weapons and ammunition. Since the beginning of 2020, 13 military convoys have arrived from Iraq to Syria, which included over 80 armored vehicles and more than 300 trucks loaded with various types of weapons, ammunition and materiel”, Rear Adm. Oleg Zhuravlev said in a daily briefing.

Reports now speak of more than a million refugees in Idleb even as the pre-war population of Idleb governorate never exceeded 1.5 million. Many of those already fled during the early war either to government held areas or to Turkey and beyond. Where are the million reported now supposed to have come from?

The ‘western’ media is again practicing tear jerking about these refugees in Idleb. But its reports forget to mention that al-Qaeda rules Idleb and that it prevents the people from crossing the line into Syrian government held areas:

In yet another lengthy, expensive, lavishly illustrated story about Idlib, the NYT once again failed to make any mention of the politics of what is happening in that enclave of northwestern Syria– namely, the fact that well-armed jihadist/takfiri fighters from all around the world have controlled it for the past several years, while Syria’s government forces have been battling to regain control.

In that latest article, as in all of the lengthy, one-sided tearjerkers it has published about Idlib over the past year, the NYT has no actual journalists or photographers on the ground reporting the story. It is wholly reliant instead on “stories” and footage it gathers from unverifiable sources inside the enclave– sources who notably never include any mention of the jihadi armed groups that control all aspects of life there.

Today we learn that many of these unverifiable sources have been on the British government payroll since at least 2012:

A number of leaked documents seen by Middle East Eye show how the propaganda initiative began in 2012 and gathered pace the following year, shortly after the UK parliament refused to authorise British military action in Syria.Drawing upon British, American and Canadian funding, UK government contractors set up offices in Istanbul and Amman, where they hired members of the Syrian diaspora, who in turn recruited citizen journalists inside Syria.
…
During 2015, Free Syria, Syrian Identity and Undermine were funded in both British pounds and Canadian dollars, with the equivalent of around £410,000 ($540,000) being spent each month.

These ‘sources’ which were hired and instructed by the UK government are the ones quoted in ‘western’ papers. The whole scheme, like the British organized ‘White Helmets’, was run by military intelligence officers:

Individuals familiar with the project say that around nine companies were invited to bid for the contracts. They included a number of firms established by former British diplomats, intelligence officers and army officers.Although the contracts were awarded by the UK’s foreign office, they were managed by the country’s Ministry of Defence, and sometimes by military intelligence officers.

These companies set up offices in Amman, Istanbul and, for a period, at Reyhanli in southeast Turkey. From here they would employ Syrians who would in turn recruit citizen journalists inside Syria, who were under the impression that they were working for the media offices of Syrian opposition groups.

Meanwhile, other leaked documents seen by MEE show that the British government had awarded contracts to communications companies, which selected and trained opposition spokespeople, ran press offices that operated 24 hours a day, and developed opposition social media accounts.British staff running these offices were told that their Syrian employees were permitted to talk to British journalists – as spokespeople for the Syrian opposition – but only after receiving clearance from officials at the British consulate in Istanbul.

One of the responsibilities of the press offices set up covertly by the British government under the terms of these contracts was to “maintain an effective network of correspondents/stringers inside Syria to report on MAO [moderate armed opposition] activity”.

In this way, the British government was able to exert behind-the-scenes influence over conversations that the UK media was having with individuals who presented themselves as Syrian opposition representatives.

It weren’t just UK media who cited those persons. The whole ‘civil opposition movement’ was, like the ‘White Helmets’, a well organized and paid British government front. But when Turkey increased its role in Syria the British dis-information operation began to shut down:

British government enthusiasm for much of the work appears to have begun to wane as it became increasingly clear that the Assad government and its Russian and Iranian allies were winning the civil war, and funding for contracts began to dry up.Early in 2019, the Free Syrian Police, a British-backed organisation, finally ceased operations following a militant takeover of Idlib province, much to the dismay of civilians and civil society activists.

The Turkish government is also said to have become less tolerant of the propaganda initiatives being co-ordinated from its territory.

One British contractor is understood to have been expelled after the Turkish authorities discovered she had entered the country on a tourist visa.

That Turkey’s government became less tolerant to the British operation may also explain the death of the British military intelligence officer who ran the ‘White Helmets’ propaganda group from his apartment in Istanbul.

One response to “Syria – Turkey’s Bluff Is Called – Media Opposition Sources Run By British Intelligence, by Moon of Alabama”