Crown Prince Mohammed, who is also referred to as MbS, “accused them (the princes) of conducting contacts with foreign powers, including the Americans and others, to carry out a coup d’etat,” the regional source said.

“With these arrests, MbS consolidated his full grip on power. It’s over with this purge,” the source added, indicating that no rivals remain to challenge his succession to the throne.

There are two plausible explanations for this step:

The first is that the two men were leading a rebellion against him within the ruling family, and it was intending to install them as king and crown prince as part of a ‘reordering’ of the House of Saud. This would have been aimed at reinstating its ‘traditional’ mode of rule, based on a more consensual and less confrontational approach to domestic and external affairs. Rumours that such a plan was being hatched surfaced last September after the mysterious killing of the head of royal security Abdelaziz al-Faghm.The second explanation is that Muhammad Bin-Salman acted to get rid of his two principal opponents within the family – some reports claim a number of other members were also rounded up – as a prelude to shunting aside his father on grounds of ill health and incapacity and having himself declared king. He thereby dealt a pre-emptive blow to his main potential challengers.

The move comes at a time where Saudi Arabia is under financial pressure. The government’s 2020 budget was predicted to have a $50 billion deficit or 6.4% of the Saudi GDP. But that was based on an estimated crude oil price of $62-63 per barrel, and assumed a crude production at around 9.8 million barrels per day.

Russia does not have a budget deficit and is well positions to survive lower crude oil prices without much damage. Saudi Arabia is not.

The pandemic also cut the second largest Saudi revenue stream which comes from the 20 million tourists per year who travel to Mecca and Medina. In February, after the Covid-19 outbreak, Saudi Arabia prohibited foreign pilgrims from entering the two cities. This years Hajj, for which 2 million pilgrims were expected, is at the end of July. Should the pandemic still be around by then the Hajj will have to be called off. Several tens of billions of dollars would then be additionally missing from the planned government revenue.

Lastly the war MbS still wages in Yemen has been taken a bad turn for him. Not only do the Houthi now have air defense missiles (vid), but they also proved that they can use them effectively when they took down a Saudi fighter jet. Last week the Houthi, also known as Ansar Allah, conquered Hazm, the capital of Jawf governorate and all inhabited parts of the oil rich province fell to them. This will have strategic consequences:

The liberation of Jawf province provided a very suitable condition for attack and dominance on strategic province of Marib. If Ansar Allah also capture the Marib, will cut the Saudi’s main supplies path from north to south of Yemen, and only the path of Al Mahrah province will remain for Saudis; also taking the control of Marib is meaning that Ansar Allah dominance on all of Northern Republic of Yemen geography; and also the most main base of Saudi coalition for Riyadh rulers will be destroyed; and practically will happen a certain failure for Saudi Arabia and after that, Yemeni army will take step for capturing the remained regions of Taiz and Aden provinces, with concentration and complete self-confidence. 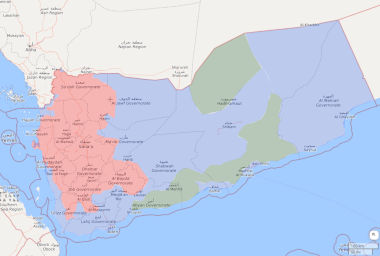 Red – Ansar Allah, Blue – Saudi proxy government, Green – al Qaeda and tribesSaudi Arabia is also occupying the eastern governorate al Mahrah along the border with Oman. It wants to build an oil pipeline to Yemen’s coast that would allow Saudi oil exports to avoid the trip through the narrow Hormuz Street. But local tribes in the al Mahrah are against the occupation and they have recently taken up arms against the Saudi army.

MbS’s little adventure has cost Saudi Arabia several billions per month. Despite all the money spent on it the Saudi army and its proxies are on the path to losing the war. The know this well. Recently the Saudis asked the Trump administration to intervene at the UN to stop all aid to Houthi held areas. The UN will likely resist such pressure. The Saudi blockade of Houthi held areas has already cost hundred thousands of Yemeni their lives.

Mohammed bin Salman’s escapade do not solve any of the many problems his country has. There are  surely many others in the very large royal family who will be willing to make a move against him. One day one of them might get lucky.

One response to “Saudi Arabia – As New Budget Problems Arise The Clown Prince Arrests More Family, by Moon of Alabama”