The Belt and Road Initiative (BRI) may be an important step towards multipolar amity, cooperation, and progress. Or it may be the biggest government-sponsored boondoggle of all time. From Matthew Ehret at strategic-culture.org:

Xi Jinping’s visit to Saudi Arabia is heralding more tectonic changes in the rules of the Great Game in ways that few have begun to realize.

While many people are quick to criticize China for having looked the other way while the atrocious Saudi-led offensive in Yemen has continued to kill hundreds of thousands of civilians since 2015, these same people miss the fact that a higher geopolitical reality is being born which will have a much greater benefit to both the people of Yemen and humanity more generally if it is not sabotaged.

Just to be clear: Saudi Arabia has a lot of blood on her hands.

However, the monarchy is also not merely the unidimensional player which many often assume whose goal is to simply bask forever in oil profits while spreading wahhabite radicalism across the Arab world while subduing any nation who stands in their way.

There is also an emergent robust young generation in Saudi Arabia (half of the 31 million Saudis are under 25) and a renewed embrace of advanced technological progress as a driver for a post-hydrocarbon age. This more healthy dynamic within the Saudi population and governing class was outlined clearly in the Saudi Vision 2030 program of April 2016 and earlier the January 2016 Joint Statement between the People’s Republic of China and the Kingdom of Saudi Arabia which read: “In the process of jointly pursuing the Silk Road Economic Belt and the 21st Century Maritime Silk Road initiative, China is willing to coordinate development strategies with Arab states, put into play each other’s advantages and potentials, promote international production capacity cooperation and enhance cooperation in the fields of infrastructure construction, trade and investment facilitation, nuclear power, space satellite, new energy, agriculture and finance, so as to achieve common progress and development and benefit our two peoples.”

END_OF_DOCUMENT_TOKEN_TO_BE_REPLACED

Sorry Seems to Be the Hardest Word. Biden Aims to Bite the Bullet and Fix Relations With the Saudis, by Martin Jay

Do American politicians kowtow harder towards Saudi Arabia or Israel? Most do both. From Martin Jay at strategicculture.org:

Biden needs to now show the Saudis that he was wrong and is sorry as he needs Riyadh more than ever before.

The so-called strategy of Biden to put the Kingdom in line and to alienate MbS has been a disaster and massively backfired. Biden needs to now show the Saudis that he was wrong and is sorry as he needs Riyadh more than ever before.

The Kingdom of Saudi Arabia has always grown accustomed to the game of the seesaw when U.S. presidents take office, as one great friend and supporter is replaced by a ‘frenemy’ who gives Riyadh the cold shoulder. But few could have predicted that this seesaw would swing back within the four-year span of a U.S. presidency, which is what we are witnessing now with the somewhat preposterous stance that Joe Biden is now forced to take with the Saudis.

When Biden came into office he made a song and a dance about not “giving blank cheques” to regional players like the Saudis and it was obvious that he had Saudi’s mercurial Crown Prince ‘MbS’ in his sights, after a catalogue of appalling human rights calamities such as the Yemen war and the ghastly murder of journalist Jamal Khashoggi.

President Biden Asks the Saudis to Bail Him Out, by Benjamin Zycher

Even if you can’t stand Biden, it hurts to see a U.S. president kowtow to the Saudi regime to help alleviate the consequences of his own idiocy. From Benjamin Zycher at realclearenergy.org:

President Biden will attend the Gulf Cooperation Council meeting in Saudi Arabia next month, with the explicit goal of convincing the GCC — that is, the Saudis — to increase production of crude oil as a tool with which reduce gasoline prices in the U.S. From a recent press conference:

Q: And my question on Saudi Arabia: Why not have the President go there and just not meet with the Crown Prince?

MR. KIRBY:  The President is going to Saudi for the GCC — the GCC+3, to be honest.  It’s nine states in the region.  There’s a big agenda there, Kaitlan, on the Gulf Cooperation Council.  It’s counterterrorism.  It’s climate change.  Certainly, it’s — oil production, obviously, is going to be on the agenda.

It’s certainly fitting that the odious U.S. regime pals around with the odious Saudi regime. From Caitlin Johnstone at caitlinjohnstone.com:

The White House has officially confirmed reports that President Biden will indeed be visiting Saudi Arabia in contradiction of his campaign vows to make the nation a “pariah” for its human rights violations, and everyone’s acting like visiting a murderous tyrant is somehow beneath the dignity of a US president.

“The President will then travel to Jeddah, Saudi Arabia, which is the current chair of the GCC and the venue for this gathering of nine leaders from across the region, at the invitation of King Salman bin Abdulaziz al-Saud,” the White House statement reads. “The President appreciates King Salman’s leadership and his invitation.  He looks forward to this important visit to Saudi Arabia, which has been a strategic partner of the United States for nearly eight decades.”

The president will meet with the nation’s de facto leader, Crown Prince Mohammed Bin Salman, to discuss what the White House calls “means for expanding regional economic and security cooperation, including new and promising infrastructure and climate initiatives, as well as deterring threats from Iran, advancing human rights, and ensuring global energy and food security.”

Iran’s government is a “regime”;  Saudi Arabia’s is a government or state, never a “regime.” As an aside, at least half of us living in the U.S. think we’re living under a “regime.” From Caitlin Johnstone at caitlinjohnstone.com:

White House Press Secretary Karine Jean-Pierre came very close to committing the cardinal sin of referring to a US-aligned nation as a “regime” on Monday.

“Of course, he will be — they will discuss energy with the Saudi government.”

However, if you watch a video clip highlighted on Twitter by Kawsachun News’ Camila Escalante, you’ll notice Jean-Pierre gets tripped up before the word “government”, with a more accurate transcribing reading something like, “Of course, he will be — they will discuss energy with the Saudi re— uhh, err, government.”

As long as Saudi Arabia sits atop one of the world’s largest pools of oil and as long as they insist on payment in dollars for that oil the U.S. will continue to sell massive amounts of armaments to Saudi regime and nobody is going to pay much attention to the Saudi’s atrocious human rights record. From Glen Greenwald at greenwald.substack.com:

Biden’s immediate abandonment of his 2020 vow to turn the Saudis into “pariahs,” and his increasing support for the regime, shows the core deceit of U.S. propaganda.

In 2018, President Trump issued a statement reaffirming the U.S.’s long-standing relationship with the Saudi royal family on the ground that this partnership serves America’s “national interests.” Trump specifically cited the fact that “Saudi Arabia is the largest oil producing nation in the world” and has purchased hundreds of billions of dollars worth of weapons from U.S. arms manufacturers. Trump’s statement was issued in the wake of widespread demands in Washington that Trump reduce or even sever ties with the Saudi regime due to the likely role played by its Crown Prince, Mohammed bin Salman, in the brutal murder of Washington Post columnist Jamal Khashoggi.

What made these Trump-era demands somewhat odd was that the Khashoggi murder was not exactly the first time the Saudi regime violated human rights and committed atrocities of virtually every type. For decades, the arbitrary imprisonment and murder of Saudi dissidents, journalists, and activists have been commonplace, to say nothing of the U.S./UK-supported devastation of Yemen which began during the Obama years. All of that took place as American presidents in the post-World War II order made the deep and close partnership between Washington and the tyrants of Riyadh a staple of U.S. policy in the Middle East.

Biden’s Visit To Saudi Arabia Exposes The Ukraine Narrative For The Sham It Is, by Caitlin Johnstone

Whatever the U.S. currently stands for, it’s current foreign policy certainly isn’t about freedom and human rights. From Caitlin Johnstone at caitlinjohnstone.com:

In a major walkback from his campaign pledge to make Saudi Arabia a “pariah” for human rights abuses like the assassination of Jamal Khashoggi, President Biden will reportedly visit Riyadh with the goal of persuading Crown Prince Mohammed bin Salman to help the US alliance win its economic war against Russia.

The Guardian tells us the trip “suggests Biden has prioritized his need to bring oil prices down and thereby punish Russia for its invasion of Ukraine, over his stand on human rights.”

So in order to punish Vladimir Putin for his war crimes and his assault on freedom and democracy, Biden will be courting a tyrannical war criminal whose country has no freedom or democracy.

I am not the first to note the risible irony of this development.

The Middle East is playing the U.S. off against China and the dollar against the yuan. From Judith Bergman at gatestoneinstitute.org:

Petrodollar System Flirts With Collapse… What It Means for Gold, Oil, and the Dollar, by Nick Giambruno

If the petrodollar standard falls, so goes the American empire. From Nick Giambruno at internationalman.com: 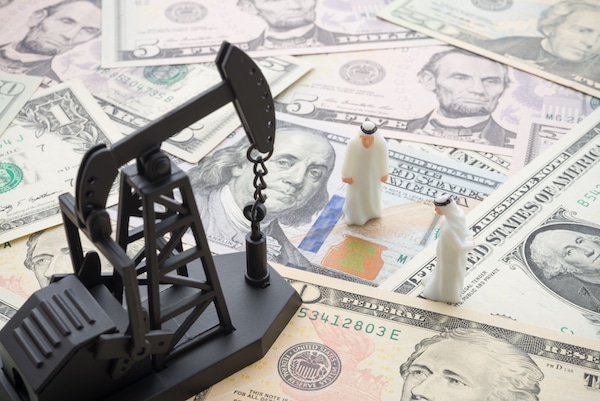 It’s been rightly said that “he who holds the gold makes the rules.”

After World War 2, the US had the largest gold reserves in the world, by far. Along with winning the war, this let the US reconstruct the global monetary system around the dollar.

The new system, created at the Bretton Woods Conference in 1944, tied the currencies of virtually every country in the world to the US dollar through a fixed exchange rate. It also tied the US dollar to gold at a fixed rate of $35 per ounce.

The dollar was said to be “as good as gold.”

The Bretton Woods system made the US dollar the world’s premier reserve currency. It forced other countries to store dollars for international trade or to exchange with the US government for gold.

However, it was doomed to fail.

Everything that the U.S. is criticizing Russia for and more is being done by U.S. ally Saudi Arabia to Yemen with nary a peep from the U.S. In fact, the U.S. sells Saudi Arabia weapons and provides operational assistance. Unlike Ukraine and Russia, Yemen does not pose an arguably existential or much of any kind of threat to the Saudi Arabia. From Walt Zlotow at antiwar.com:

While the U.S. government and mainstream media rightly condemn Russia’s invasion of Ukraine, neither offer one iota of protest against US enabling of Saudi Arabia’s horrific war against neighboring Yemen that has killed over 400,000 and puts millions at risk of starvation.

The Saudis started the war 7 years ago today by intervening in Yemen’s civil war to prevent an Iranian aligned faction from becoming their neighbor. For America it represents a proxy war against the hated Iranian regime.

America has been all in helping the Saudis with US made planes and bombs; refueling and maintenance help, and logistical support. Without US support the incompetent Saudi war effort would collapse, making America instrumental in the carnage and humanitarian catastrophe called the ‘worst in the world’.