Update on the WTF-Collapse of Consumption of Gasoline, Jet Fuel & Diesel, by Wolf Richter

There’s a straight line and obvious connection between the health of the economy and energy consumption, and the main source of energy in the American economy is still petroleum products. From Wolf Richter at wolfstreet.com:

Folks started driving again – including those who used to take mass-transit. But jet fuel demand is still in collapse-mode. And overall consumption remains way down.

Ridership on San Francisco’s Bay Area Rapid Transit (BART) trains was still down 89% in June, compared to June last year, according to BART. Not because the Bay Area economy has collapsed by 89% — it has not — but because many people are working from home, and those people who do go to work are driving to avoid the infection risks associated with riding on a commuter train. Driving-instead-of-taking-mass-transit is playing out across the US. And we’re seeing some of that in gasoline demand. But jet fuel consumption is still in collapse mode. And diesel consumption has been down sharply for over a year.

Starting in mid-March, demand for gasoline collapsed in a historic manner. By now 32 million people are claiming unemployment compensation under state and federal programs, and many others switched to work from home, and both groups quit driving to work. Gasoline consumption at the low point in the week ended April 3 plunged by -48% year-over-year, to just 6.7 million barrels per day, the lowest in the EIA’s data going back to 1991.

Folks started driving again, bit by bit, to go to work, and because it’s summer driving season. In the week ended July 17, gasoline consumption, at 8.55 million barrels per day, was down 11.6% year-over-year, according to EIA data. Consumption of gasoline has been in the minus-6% to minus-12% range now for the fifth week in a row, with the latest week being the steepest decline:

The EIA tracks consumption in terms of product supplied by refineries, blenders, etc., and not by retail sales at gas stations.

At 8.55 million b/d in the latest week, gasoline consumption was back near the low end of the past few years, a volume first reached in the mid-1990s, which shows that selling gasoline in the US is not a growth business, even during the Good Times. Gasoline consumption has now left nearly all of that historic WTF-collapse in March and April behind: 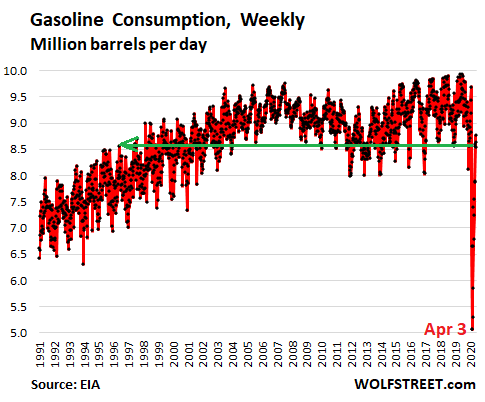 Kerosene-type jet fuel consumption in the week ended July 17 was still down 41.3% year-over-year. As huge has this decline is, it’s only about half of the worst declines in this crisis, which maxed out at -80% in the week ended May 8, when consumption collapsed to just 352,000 b/d, by far the lowest in the data going back to 1991. At 1.08 million b/d in the latest week, a big drop from the prior week, consumption was still at multi-decade lows: 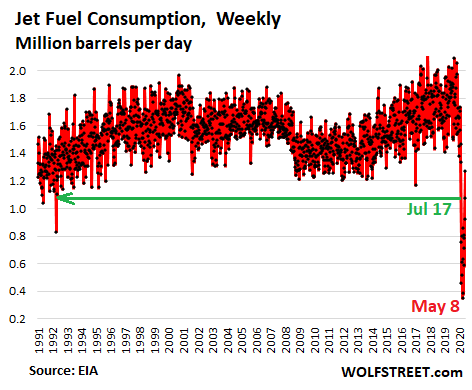 This category of fuel includes diesel fuels used by trucks and some cars, railroad engines, equipment for agriculture, oil-and-gas drilling, construction, diesel generators, etc. And it includes fuel oils, such as for space heating and utility-scale power generation, where demand is very seasonal and impacted by the weather.

The trucking and railroad business has suffered through a year-and-a-half long downturn in the freight sector. And the pandemic sharpened that downturn. 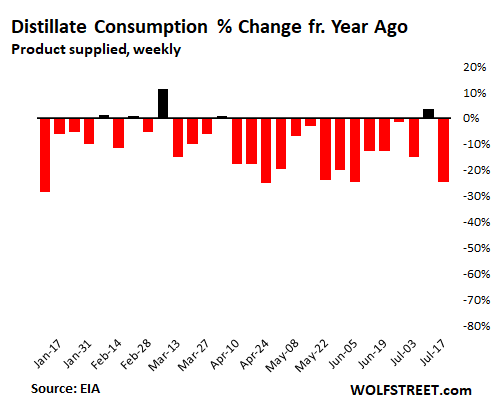 Combined, consumption of gasoline, jet fuel, and distillate in the week ended July 17 dropped from the prior week to 12.85 million b/d, still down by 18.5% year-over-year:

As far as the US oil industry – and the global oil industry – is concerned, this decline in demand in the US, though it has abated from the fall-off-the-cliff weeks, remains huge.

In addition to the short-term challenges, the US oil industry now faces several structural issues, including work-from-home that is becoming an established practice for an increasing number of jobs, a new corporate reticence to send employees willy-nilly on business trips and to conferences, and the increasing sales of EVs. All automakers now have models on the market and are aggressively pursuing this segment. The petrochemical industry will continue to use petroleum and petroleum products. But for petroleum-based transportation fuels in the US, demand may not return to the highs established in 2018 and 2019.

This entry was posted in Business, Economy, Energy and tagged Petroleum products consumption. Bookmark the permalink.

One response to “Update on the WTF-Collapse of Consumption of Gasoline, Jet Fuel & Diesel, by Wolf Richter”