This kind of display is encouraging. The world needs a lot more of them. From Paul Joseph Watson at summitnews.com: 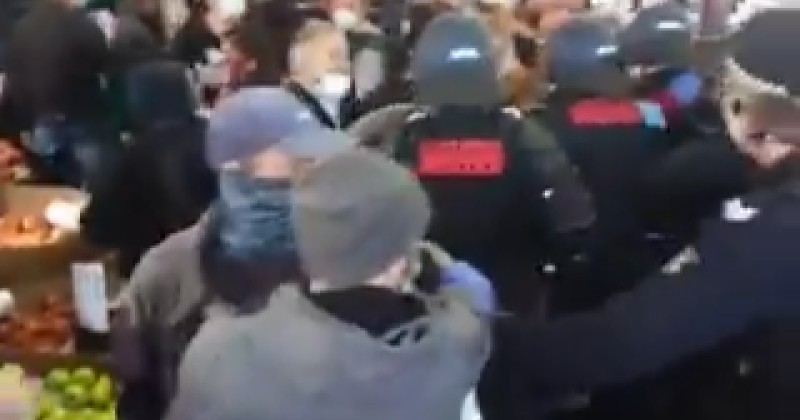 A remarkable video out of Australia shows people chanting “freedom!” as a food market is forcefully shut down by COVID riot cops.

The clip shows dozens of police on horseback and armed with riot gear facing off against market sellers and customers.

Chants of “freedom, freedom!” then break out as one officer directs the riot police to move in.

Cops armed with shields then begin charging and pushing people away while one man is singled out and dragged away by officers.

Check out this amazing moment in Australia. Looks like a market where the police force is gonna shut down. The crowd starts chanting "freedom, freedom" before being raided. pic.twitter.com/wpQRGiTtN5

The state of Victoria has enforced one of the most draconian coronavirus lockdowns in the developed world, with authorities giving themselves the powers to enter homes without a warrant and also seize people’s children.

As we highlighted earlier this month, a pregnant woman was arrested in her home in front of her own kids for the crime of posting about the protest on Facebook.

Police in Melbourne also announced that they would be using surveillance drones to catch people who don’t wear masks and to keep track of cars that travel further than 5km from home.

Journalist Avi Yemini was also dragged to the ground and arrested for merely covering an anti-lockdown protest in Melbourne.

Numerous videos have also emerged of people being forcibly arrested by police for not wearing masks.

One response to “Coronavirus Video: Australians Chant “Freedom!” as Market is Shut Down by COVID Riot Cops, by Paul Joseph Watson”