Pentagon goes rooting for ‘extremists’ among its 3.6mn trained killers, by Helen Buyniski

Is it possible that our fighting forces have more important things to worry about than the politics of its warriors? From Helen Buyniski at rt.com: 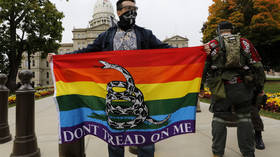 Boogaloo Boy checking all his ‘extremism’ boxes © AFP / Jeff Kowalsky
The US military is making a big show of cleansing its ranks of ‘extremism’ – because nothing says tolerance like raining fiery death on innocent strangers at the command of a guy who just stepped down from Raytheon’s board.

With “domestic extremists” now officially the enemy du jour in Washington, the top order of business has become finding some. On Wednesday, newly-anointed secretary of defense (and former Raytheon board member) Lloyd Austin ordered a two-month stand-down so that commanders could engage in “needed discussions” with their subordinates on the issue.

Did we mention they have a lot of subordinates? There are 3.6 million service members in the most expensive military in the world, and evaluating every single one of them for a characteristic that lacks even a universally-agreed-upon definition is certain to be both time-consuming and frustrating.

It’s also quite likely to backfire. Being spuriously accused of “domestic extremism” is the sort of thing that might turn an ‘ordinary’ soldier into an anti-government ‘extremist.’ After all, what sort of gratitude is rewarding a person who just signed up to die for their country with the ideological equivalent of a prostate exam?

This entry was posted in Government, Military, Politics. Bookmark the permalink.