The US airstrike on Syria: Meet the new boss, same as the old boss, and the boss before that, by Scott Ritter

Bombing less powerful countries is what the US military does, regardless of who is president. From Scott Ritter at rt.com: 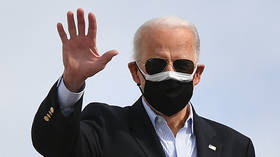 Joe Biden boards Air Force One at Joint Base Andrews in Maryland on February 26, 2021.
President Biden travels to Texas to visit a food bank and em © AFP
In his first publicly acknowledged military act as commander-in-chief, President Joe Biden orders an assault on Syria, and proves that when it comes to solving the many problems of the region, he’s no better than Trump, or Obama.

President Biden ordered US military aircraft to strike targets on Syrian soil that the US claims were affiliated with two pro-Iranian militias, Kataib Hezbollah and Kataib Sayyid al-Shuhada. The US, working closely with Iraqi security services, has implicated Iranian-backed Shia militias in a recent rocket attack on a US airbase in Erbil, Iraq, that killed a foreign contractor employed by the US and wounded four American contractors and a US service member.

A Pentagon spokesperson, John Kirby, called the attack, which was carried out by US F-15E aircraft and killed up to 17 people, a “proportionate military response” designed to send “an unambiguous message: President Biden will act to protect American and coalition personnel.”

White House Press Secretary Jen Psaki noted that the strike was part of a calculated response “using a mix of tools seen and unseen.” Psaki sought to differentiate the actions of the Biden administration from previous airstrikes undertaken during the Trump administration against the exact same target, for precisely the same reasons, a little more than a year ago. “What we will not do,” Psaki noted, “and what we’ve seen in the past, is lash out and risk an escalation that plays into the hands of Iran by further destabilizing Iraq.”

So that’s all clear and ok, then…or is it?