“I Shoot a Bunch of 3D Printed Guns – Do My Hands Survive?” by Tyler Durden

A decentralized network of 3D printed gun advocates is mobilizing online and quickly revolutionizing gun designs, sharing blueprints, advice, and building a community. There’s no easy way the federal government can halt this movement as President Biden, not too long ago, declared war on “ghost guns.”

YouTuber Sean with “The 3D Print General” attended “Bear Arms N’ Bitcoin” on April 10-11 in Texas. The first day involved top experts and practitioners that gave the audience actionable steps on how to print 3D guns at home. The second day, readers should be excited for this, was when Sean attended “shooting rad guns” day. 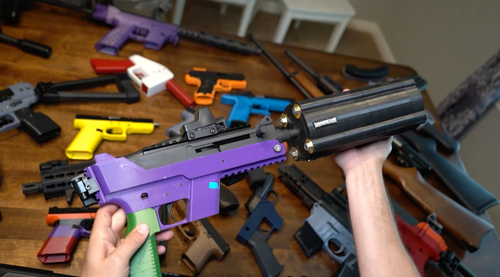 The event was held at Onion Creek Gun Club, located in Austin, Texas. Sean shot various 3D-printed weapons, such as the FGC-9, which stands for “f**k gun control 9 mm.” As we’ve noted, the FGC-9 can be printed entirely at home for the cost of $350, including the printer’s cost.

This entry was posted in Civil Liberties, Government and tagged 3-D Guns. Bookmark the permalink.