The Credit Card Hustle by the Banks & the Fed Hits Rough Spot, by Wolf Richter

Credit cards are hugely profitable, and their issuers certainly don’t want to see their customers pay them off. From Wolf Richter at wolfstreet.com:

Are Americans finally figuring it out as they’re paying down their credit cards by record amounts? So far, $25 billion a year in lost interest income for the banks!

By Wolf Richter for WOLF STREET.

There has been a lot of commotion in banking and at the Fed about Americans having the temerity to pay down their credit cards – practically an abuse of stimulus, so to speak. In the five quarters since Q4 2019, Americans have paid down their credit card balances by $157 billion. “One of the most confounding changes in debt balances,” the New York Fed called it. Credit cards are immensely profitable for banks. The Fed has been repressing interest rates with all its might, but credit card interest has remained astonishingly high.

According to the most recent data from the Federal Reserve, banks charged on average 15.9% interest on credit card balances that were actually assessed interest. This is down 1.2 percentage points from the record in May 2019 (17.1%), but way above historic levels (red squares in the chart below).

By comparison, the average yield of BB-rated corporate bonds, the upper end of the junk-bond range (my cheat sheet for corporate credit ratings) has dropped to a record low of 3.2% in February, according to the ICE BofA BB US High Yield Index, and has barely ticked up since then (black line). In terms of making money off consumers that are in debt and that have run out of options, there is nothing like it out there: 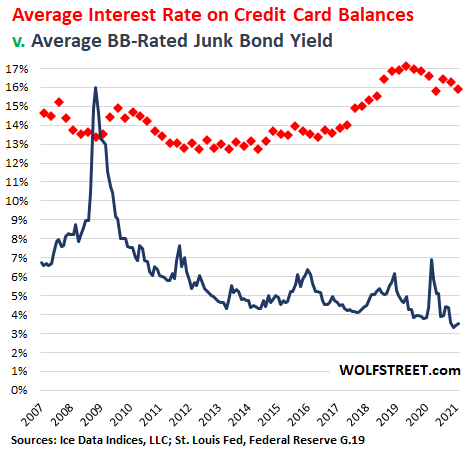 This entry was posted in Banking, Business, Debt and tagged Paying off credit cards. Bookmark the permalink.