Given its ubiquity, official propaganda production and propagation is surprisingly centralized. From Swiss Propaganda Research at swprs.org via zerohedge.com:

It is one of the most important aspects of our media system, and yet hardly known to the public: most of the international news coverage in Western media is provided by only three global news agencies based in New York, London and Paris.

The key role played by these agencies means Western media often report on the same topics, even using the same wording. In addition, governments, military and intelligence services use these global news agencies as multipliers to spread their messages around the world.

A study of the Syria war coverage by nine leading European newspapers clearly illustrates these issues: 78% of all articles were based in whole or in part on agency reports, yet 0% on investigative research. Moreover, 82% of all opinion pieces and interviews were in favor of a US and NATO intervention, while propaganda was attributed exclusively to the opposite side.. 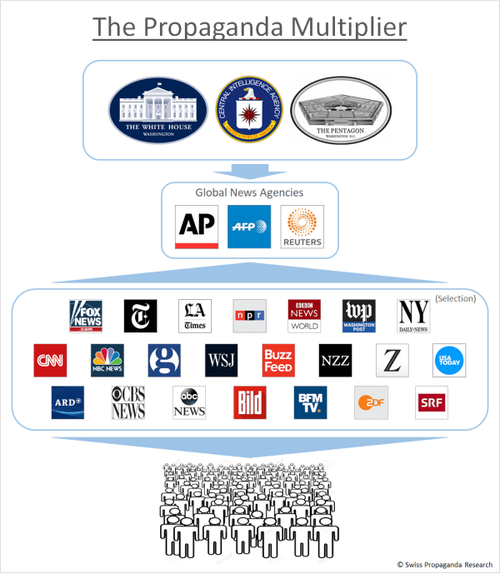 This entry was posted in Media, Politics, Propaganda and tagged Global News Agencies. Bookmark the permalink.