There may be a mistrial in the Kyle Rittenhouse case. From Tyler Durden at zerohedge.com:

Attorneys for Kyle Rittenhouse have asked Judge Bruce Schroeder to declare a mistrial in the case, accusing lead prosecutor Thomas Binger of “what amounts to prosecutorial overreach” when he questioned the teenager’s right to remain silent after his fatal shootings of two men who chased an attacked him during demonstrations in Kenosha, WI last year. 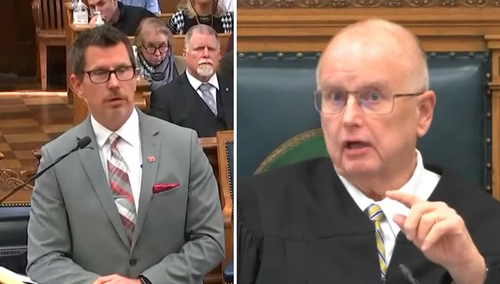 With the jury out of the room, Schroeder warned Binger after he asked Rittenhouse why he chose to remain silent about the incident until now.

“The problem is this is a grave constitutional violation for you to talk about the defendant’s silence,” Schroder told Binger. “You’re right on the borderline, and you may be over it. But it better stop.”

Judge Scolding The Prosecution In The Rittenhouse Case

“The problem is this is a grave constitutional violation for you to talk about the Defendant’s silence.”

“You are right on the borderline, you may be over. It better stop.” pic.twitter.com/OVK9eYOSSm

Schroeder again admonished Binger for bringing a matter before the jury which Schroeder had explicitly disallowed – causing defense attorney Mark Richards (and others) to accuse the prosecution of trying to provoke a mistrial.

“I was astonished when you began your examination by commenting on the defendant’s post-arrest silence,” said Schroeder, adding “That’s basic law. It’s been basic law in this country for 40 years, 50 years. I have no idea why you would do something like that.”