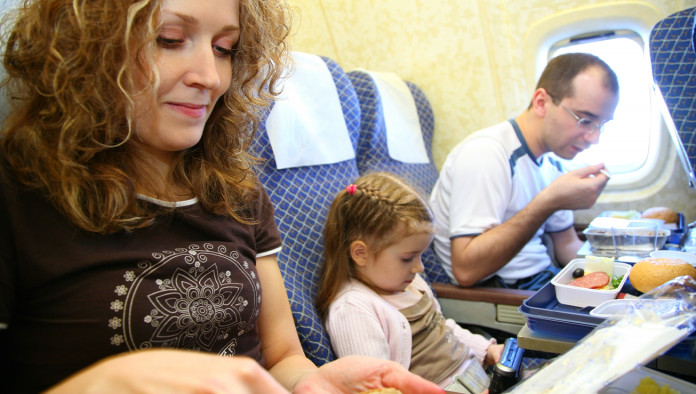 U.S.—A federal judge has issued a landmark ruling that families no longer have to pretend to be eating for five straight hours on a flight in order to not wear a mask. According to the ruling, Americans can now enjoy their flights

“I hereby rule that Americans may remain maskless even if they aren’t pretending to slowly eat a bag of Cheetos, trying to stretch the delicious puffy cheese snack over a full five-hour flight,” said the judge in her ruling. “They may now board planes without the ridiculous warning about taking off your mask before you put on your oxygen mask before the flight, or the crazy one where they would tell you to remask between bites and sips. This is Amerca, for goodness’s sake.”

“Go ahead and board a plane without feeling the need to eat a bag of Bugles in slow-motion the entire time.”

Americans who got a Coke at the beginning of a flight and slowly sipped it or pretended to take drinks whenever the flight attendants walked by say they are delighted by the ruling, as they can now have exactly the same low risk of catching COVID on a plane without having to exercise their acting skills. Airlines are saying there’s already a lower demand for small bags of pretzels and miniature cookies on their planes as Americans no longer have to frantically grab the snack foods from the flight attendants in order to have an excuse for not wearing a mask.

There will also be a sharp decline in the number of times you’re awakened by a flight attendant after you finally dozed off on an airplane because she needs to pester you to pull your mask back up over your nose.

The ruling also covered 2-year-olds on planes, saying airlines can no longer drag a family off a plane because they’re having trouble getting their 2-year-old to cover their face. Liberals are calling this “an ominous move toward fascism in America” and “the end of democracy.”

This entry was posted in Civil Liberties, Humor and tagged Masks on airplanes. Bookmark the permalink.