Governments propose, individuals dispose, and the headline captures why all immoral governments (all of them so far) of all sizes eventually fail. From Caden Pearson at The Epoch Times via zerohedge.com:

Sheriffs from numerous Illinois counties on Wednesday said they won’t enforce a new ban on so-called “assault weapons” and magazines that hold more than 12 rounds, signed into law by Gov. J.B. Pritzker on Tuesday. 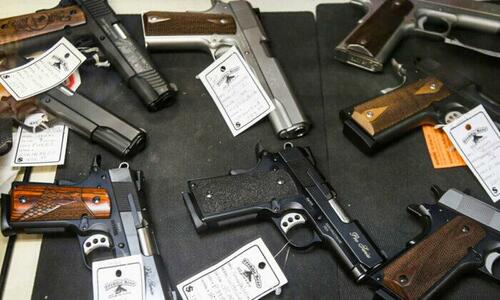 Iroquois County Sheriff Clinton J. Perzee was among a number of Illinois law enforcement officials who took to social media following the passage of the bill, arguing that it violates the Second Amendment.

“The right to keep and bear arms for defense of life, liberty and property is regarded as an inalienable right by the people,” Perzee wrote in a letter.

“I, among many others, believe that HB 5471 is a clear violation of the 2nd Amendment to the U.S. Constitution.”

On Dec. 13, 2022, the Iroquois County Board passed Resolution R2022-102 in opposition to the bill being enacted and further resolved at the time not to enforce or support the law through the “use of county funds, appropriation, personnel, or property.”

As the Iroquois County Jail’s custodian and chief law enforcement official, Perzee said that neither he nor his office would check to ensure that “lawful gun owners register their weapons with the State, nor will we be arresting or housing law abiding individuals that have been arrested solely with non-compliance of this Act.”

Other gun-related crimes would continue to be investigated and enforced, he said.