One car maker is making money by not following the trends. From Eric Peters at ericpetersautos.com:

An interesting thing that’s not being reported – by the usual suspects – is that Mitsubishi’s net profit hasn’t dropped by nearly half, as GM’s has.

It is interesting because Mitsu has had to deal with the same “supply chain disruptions” that supposedly contributed mightily to GM’s massive losses. Yet Mitsubishi just reported its quarterly profit has nearly tripled. It also posted the biggest short-term gains in six years. Including – and before – the “pandemic.” 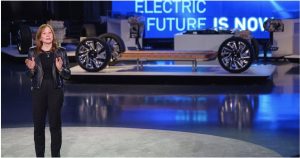 Mitsu sells affordable cars rather than electric cars. Cars like the Mirage, a five-door hatchback that stickers for $14,645 to start – which is less than half the price of a Chevy Bolt EV. It also weighs about 1,500 pounds less than a Chevy Bolt  – which weighs close to two tons. Which is why it can travel close to 400 miles on the highway rather than the 259 miles the government says the Bolt can go.