The One Electric Car That Makes Some Sense . . . by Eric Peters

There is one electric car that represents and innovative and exciting step forward. From Eric Peters on theburningplatform.com:

It’s interesting about the Chevy Volt.

Uniquely, it carries around its own recharger – so it’s not tied to a corded umbilical like other electric cars. So it isn’t gimped by a much-abbreviated radius of action, like all other electric cars – the best of which can travel maybe 150 or so miles before their batteries conk out and the car must hook up to an electric IV for an extended recharging session.

When the Volt’s battery pack’s charge runs down, fresh current is fed into it as you drive – without having to stop driving.

This is superficially similar to the way a hybrid works but also very different. 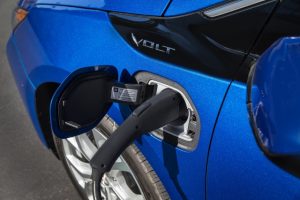 Unlike hybrids, the Volt is a true electric car. A motor and batteries provide the primary motive power – what makes it go – as opposed to back-up power. There is a small (1.5 liter) gas engine, but it serves almost exclusively as a generator. It comes on as needed to make electricity for the batteries, not torque and horsepower to turn the wheels. In the Volt, electric motors do that.

In a hybrid, the electric motor and batteries take over when the vehicle isn’t moving – or moving at low speed. Most can only creep along for a couple of miles – and no faster than about 30 MPH – before the gas engine cuts in and takes over to propel the car, just like any other car.

To continue reading: The One Electric Car That Makes Some Sense . . .

This entry was posted in Business, Technology and tagged electric cars. Bookmark the permalink.