“I Paid To See A Movie About Singing. I Got Ninety Minutes Of Pentagon Propaganda.” by Caitlin Johnstone

It’s a wonder we don’t have to stand for the National Anthem before movies. From Caitlin Johnstone at medium.com: 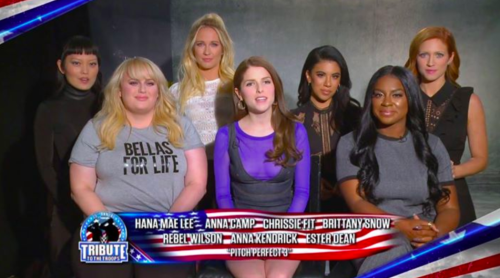 To cap off a long, strange day, my husband and I took the kids out last night to see Pitch Perfect 3. The first Pitch Perfect is a firm favorite in our household, the kind of movie we end up watching when we can’t agree on what to watch. We’d been waiting til we all had a night to see the latest one together, so we made a night of it and went out for some dinner, too. I even had a Coke. The sugary kind. This was a big night, people! So we were all in high spirits and I entered the theater excited to see some good music and have a good time.

Before I go on I should mention that a group called Insurge Intelligence published a report a few months back on thousands of military and intelligence documents obtained under the Freedom of Information Act which showed unbelievably extensive involvement of US defense and intelligence agencies in the production of popular Hollywood movies and TV shows. Just from the information this group was able to gain access to, the scripts and development of over 800 films and 1,000 television titles were found to have been influenced by the Pentagon, the CIA, and the NSA to advance the interests of the US war machine. We’re talking about big, high profile titles you’ve definitely heard of, from Transformers to Meet the Parents.

So it’s an established fact that these depraved agencies of destruction and domination are balls-deep in Hollywood production. You can understand my discomfort, then, as it became evident that the movie I’d sat down to watch with my family was set on US military bases for no reason whatsoever. There was nothing about the plot of Pitch Perfect 3 that required this; any music tour of any kind would have worked just as well. The antagonist had nothing to do with the military, the protagonists were a civilian a capella singing group, and the general conflicts and resolutions of the film were entirely uninvolved with anything related to the armed forces of any nation.

To continue reading: “I Paid To See A Movie About Singing. I Got Ninety Minutes Of Pentagon Propaganda.”